I Hate Family Guy As Much as the Next Sane Person 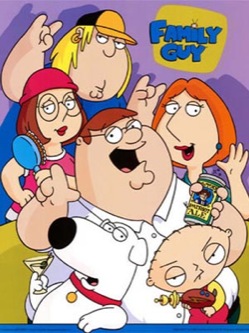 But when viewed through the lens of a furious American Family Association, it becomes much more entertaining. From this morning's AFA Alert, "Fox's 'Family Guy' goes too far; file a complaint with the FCC":

On March 8, Fox network aired Family Guy, a perverted and sickening program, into the homes of millions of Americans. This episode was rated TV-14 DLSV by FOX, meaning that in the network's opinion it was appropriate for 14-year olds. It aired during prime-time. The content of this program was so explicit that I can't even begin to describe it here.

Click here to watch these scenes or read our detailed review. WARNING: These scenes taken from the Fox program Family Guy are highly offensive.

I've literally never, ever laughed at a Family Guy. But when described in detail by the AFA, Family Guy becomes almost funny. Among the detailed offenses:

Peter leaves his son Chris in charge of the family while he spends time with his gay partner. Upon his new role, Chris immediately passes gas in his sister’s face and knocks out his mother, Lois.

Peter lies in bed with his rear exposed and moans in pleasure when a horse, which he assumes is his wife, licks his rear.

Even worse than the episode's interspecies analingus and infant jizzplay was its treatment of Christians:

Even more offensive is Fox's view of Christianity. At a "straight" meeting, the speaker talks to gays about Jesus and tells them, "He [Jesus] hates many people, but none more than homosexuals." Incidentally, Pepsico helped sponsor this program.

You really cannot get the full effect of the show's portrayal of Christianity without watching the video or reading our review. You will hear the tone and sarcasm very clearly.

The FCC has a duty to enforce the law and fine Fox for this sickening violation of broadcast decency standards. In addition, your local FOX network affiliate did not have to air this episode. Obviously, they do not care about your local community standards.

Family Guy and the American Family Association: Two crappy institutions that miraculously bring out the best in each other. More, please.