Did you know a new version of the Nintendo DS was coming out this weekend? You did? Then you're nothing like everyone else who I've asked, nerds and noobs alike. That may change, as Nintendo has finally begun the marketing strike about the DSi's Sunday release, but the original DS, and then the DS "Lite" revision, never suffered this kind of radio silence. 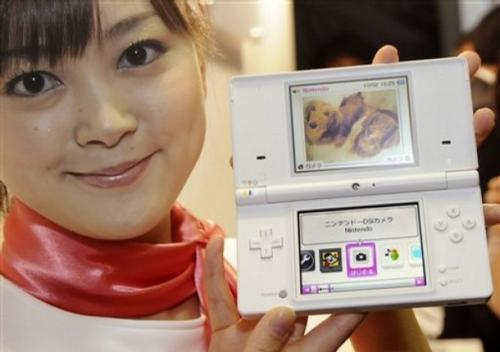 The reason is the DSi itself—a solid upgrade, but with its weird feature set, it's hard to view the thing as more than a stopgap before the next big system.

At first glance, $170 gets you a slightly upgraded DS Lite. The system's famed two screens are slightly bigger and sharper, but hours of tests didn't make them seem superior. I did notice that the basic buttons have been made clickier—not as recessed—which is a little easier on the fingers.

Of course, $40 more than the DS Lite (still in stores, still in production) gets you a few prominent additions: two cameras, an SD memory card slot, an internal web browser, and a downloadable games store. One camera's on the outside of the unit, and the other is aimed at the user's face. Nintendo will release DSi-only games that use these cameras, much like the PlayStation's EyeToy, but so far, the ones that have come out in Japan have received a lukewarm reaction—I guess Shigeru Miyamoto's next big idea has yet to surface (perhaps we'll someday see portable Wii Fit with fatty facial recognition).

The DSi's basic photo app combines these wimpy, 0.3 megapixel cameras with goofy filters. Some are fun, particularly the ones that recognize faces and then automatically add decals, but once the Kid Pix appeal wears off, I'm left with a camera that's 1/3 the power of my cell phone's that can't shoot video. Why not combine the cameras and wifi to make this the first popular straight-to-YouTube device?

(Metro gamers, pay heed. If you want to take this on the bus and slyly snap photos of crazy dudes, know that the DSi blinks a red light at its victims when in camera mode.)

Other quibbles: There's a music player/memo recorder complete with real-time sound modulation, but it doesn't take MP3s, only AAC files. That's the iPod format; if I have music in that, doesn't that probably mean I have an iPod? Redundant. The web browser is a nice addition—and way faster than the original DS web browser sold as an add-on years ago—but it renders iPhone-friendly sites at 1/5 the speed of my dinky flip phone. Don't bother visiting normal sites or anything with Flash, either, or it'll complain about being "out of memory."

The only great new feature is the downloadable games store, which hosts smaller and more experimental games at $2-8 a pop. Nintendo gives new users $10 credit for free if they're an early adopter, which is welcome, and the store already has a range of titles, from arcade stuff to a trippy Art Style release to a miniature version of Brain Age. Rumor has it that old Game Boy games will find their way to this store (crossing my fingers). But, just like with the Wii, Nintendo isn't offering demos or significant previews for these games and apps, and none of the initial releases have any buzz.

For people who don't own a DS, this could eventually become the definitive version to own, especially if 1) the games store gets some experimental treats and 2) online updates in the future add features like Flash playback on the web, MP3 support, and video capture support. Until then, this is nothing like the "Phat-to-Lite" upgrade, so that $40 is probably better spent on two good games for your new, still-great DS Lite. And for someone who already has a DS Lite and $170 burning a hole in their pocket, well, you better really love pissing off bums on the bus with a little, red light.