At the end of Gibson's All Tomorrow's Parties, the third novel in his Bridge series, the Japanese computer construct and popstar, Idoru (Idol), leaps out of machines that look like ATMs in stores that look like 7-Elevens. Cyberspace invades physical space. Similarly, the technology Pattie Maes's team is developing at MIT, wearable tech... 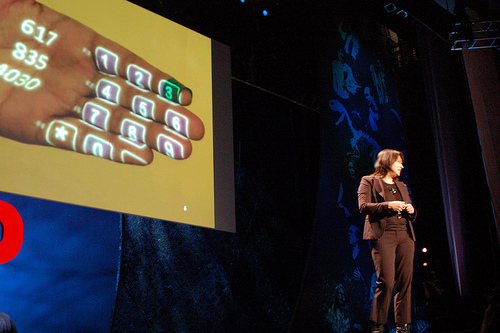 ...this too is a kind of invasion: one type of space challenges another. By reversing the positions of the user and cyberspace, the space inhabited by a person becomes unified with the space of electronic information. Instead of looking into a screen, cyberspace leaps out and becomes a part of real space. This leap, this reversal, this invasion will represent the most radical development in the brief history of the internet. The leading heroes of the cyberpunk movement longed to escape the body (flesh, meat, blood, bone) and enter the eternal ether of information. But the direction of this longing was wrong. The correct direction will not be inward but outward, not internalization but externalization.

It is this that truly separates wearable tech from smart phones. What the latter offers us is the ability to look into the invisible other world. Wearable tech projects this internal/invisible world onto actual space. What was inner becomes a part of what we understand, mark, index as real. The social, existential, and philosophical implications of this transformation will be profound. It's as if Hegel's geist in his grand narrative of the history of consciousness, Phenomenology of the Spirit, actually came true. We can laugh at Hegel and his impossible absolute spirit, but we cannot laugh at Pattie Maes and her wearable tech.