Last March, developer Murray Franklyn demolished a row of neighborhood businesses and bars on Pine Street and Belmont Avenue—including the Cha Cha, Bus Stop, Manray, and Kincora—to make room for a mixed-used development. Shortly thereafter, the project manager said Murray Franklyn may begin construction within a year. (The company faced a legal challenge over whether its design for the building jibed with city code; a judge gave the project a green light in July 2008.) That year is up, but the site remains a block-long, gravel-covered parking lot. 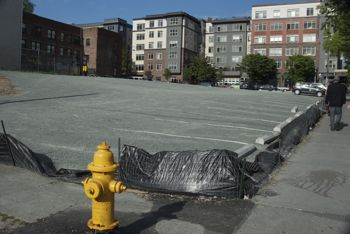 Murray Franklyn's former development manager, Wade Metz, is no longer with the company. Instead, a receptionist directed me to the company's new point person, Steve Hiller. I asked Hiller when construction would begin.

“No, no, no, no, really, no plans at the moment to where that’s going,” Hiller told me. “Basically it’s a 'no comment' because I don’t have knowledge on it.” Hiller, the head of marketing for the Bellevue-based company, which specializes in suburban housing developments, was not aware of the project, the site, and had never heard of The Stranger. He asked me to send an email and that “maybe” someone would get back to me.

I called back the main phone number, explaining that Hiller wasn't familiar with the development plans. “He wasn’t?” said the receptionist. “He’s the marketing department head.”

Follow-up emails and phone messages left with other people at the company this morning have not been returned.

Murray Franklyn purchased the site in March 2007 for $6 million.