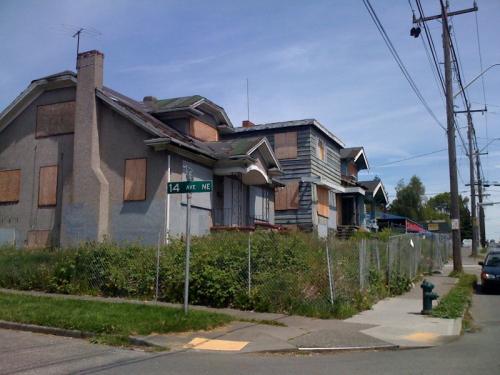 If a controversial landlord gets his way, sixteen-story residential towers would replace run-down houses in the Roosevelt neighborhood. Developers working with Hugh Sisley, who owns 50 properties hugging Northeast 65th Street, submitted plans in late April to redevelop the dilapidated rentals and boarded-up houses. Today, the city announced it would study the proposal and issue a report on the impacts of increasing the area’s height limit from 40 feet to up to 160 feet.

The area, in many respects, seems ideal for more density: The properties sit from one to three blocks from the future Roosevelt light-rail station, which voters approved last November. But neighbors—conflicted between finally getting rid of blight and the specter of upsetting a quiet neighborhood—say that 16 stories is too tall.

“The largest zoning proposals are truly laughable from our perspective,” says Jim O’Halloran, land-use chair of the Roosevelt Neighborhood Association. “160-foot and 125-foot tall buildings are not even worth talking about.” The group, in the past, has proposed buildings that are only about 40 feet tall, and he expects the group to reassert that 40 feet is the maximum height it will tolerate.

But the neighborhood is in a weak position to play hardball; Sisley may not accept an offer under 85 feet. “He wants the highest and best use,” Jon Breiner, a principal of Roosevelt Development Group, which signed a contract with Sisley to try and develop the properties, said last year. If Sisley, known for being stubborn and aloof to neighborhood concerns, rejects the offer, he could leave the abandoned properties as magnets for vermin and vagrants. Nonetheless, the city’s impact study will likely find unmanageable impacts from the tallest proposed buildings, favoring heights capping out around 85 feet. Here is the area we're talking about: 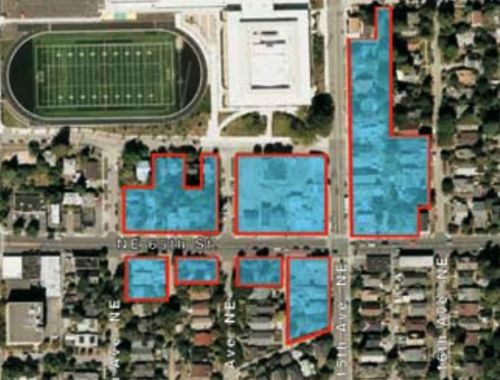 O’Halloran says residents may be “willing to contemplate 65 to 85 foot building heights” in exchange for amenities such as building a new park and preserving views of the historic brick face of Roosevelt High School (the white box in the photo next to the football field).

“No one is happy, not Sisley or neighbors, with the current situation, but we aren’t willing to take anything just to change it,” O’Halloran says. “I don’t think a man in his 80s wants to die surveying the squalor.”

The city will hold a meeting to take public comment on what factors it should study (e.g., traffic, parking, shadows, etc.) when considering Sisley's proposal on June 9. Comments may also be submitted in a letter. Details are here.