Back in February Sally Kern, Oklahoma's infamously bigoted state representative, spoke at a John Birch Society conference. (Who knew they were still meeting?) Kern called for a second "Great Awakening" to confront the growing homosexual menace. The gays, according to Sally, had a secret plan ("The Protocols of the Elders of West Hollywood") to convince the world that homosexuality is a "superior lifestyle." Sally warned the Birchers—who we came this close to flipping—not to be fooled by our nefarious themes:

"You know, I've done a lot of reading on this. I wish I could describe to you their behavior. I will not because I would be redder than this suit.... The theme of equality and freedom is the approach that the homosexuals are using today—totally perverting the true intention of what our Constitution meant. The homosexuals get it—it's a struggle between our religious freedoms and their right to do what they want to do."

The masses, Sally went on, would be "shocked and repelled" if prematurely exposed (?) to the depraved behaviors we gays get up to—behaviors that everyone will apparently be obligated to engage in once we've convinced the world of the superiority of the homosexual lifestyle.

My first impulse upon reading Sally's comments—way back in February—was to take a picture of this plate of cookies on my kitchen counter when I got home from work:

I had hoped to get a picture of a plate full of cookies, and this plate was full when I left for work. But the boyfriend and the kid and the kid's friends had been at the cookies all day and there were just two left—two the boyfriend saved for me—when I got home. I baked those cookies myself and from scratch. Baking is something I enjoy doing for my family and I guess you could call it a depraved behavior, carb-wise. (I'd go so far as to describe my baking as a depraved cycle of self-abuse: bake delicious cookies, eat delicious cookies, feel fat, hit the gym... bake delicious cookies, eat delicious cookies, feel fat, go to the gym...) But I took the picture tp refute Kern's charges of depravity. I was going to post this picture and say, "Is this the kind of depraved behavior that you meant, Sally? Baking cookies for your family?"

It's the same reaction most of us 'mos have when a right-wing bigot drops dark hints about our depraved lifestyles and all the top-secret sex stuff we get down to when no one is watching. (You can see video and photos of all this top-secret sex stuff at XTube and on various Christian websites.) It's a knee-jerk, defensive response, and when it doesn't take the form of a photo of plate of cookies it's usually expressed like this: "Hey, we're not so different! We go to work, we pay our taxes, we take care of our families, we even bake cookies—what's so depraved about all of that?"

But you know what? We are different, we gay people. If I may generalize: gay people tend to have more interesting sex lives than straight people—the kinds of sex lives that scare dumb bigots who're afraid of their own genitalia. We bake cookies (see above), we go to work, we take care of our families, we pay our taxes. We do all of that. But we go in for a little "depravity" at slightly greater rates than straight people and with a lot less angst. We have this ability to let ourselves live a little. Once you've told your momma that you wanna kiss boys giving yourself or your partner permission to indulge in this, that, or the other kink isn't anywhere near as scary. Not remotely. So long as you're safe and sane about it, and indulge in moderation, where's the harm?

When Mrs. Kern fumes about depraved sex acts I can't help but thinking that Mr. Kern is jealous. He probably doesn't want to get it on with depraved gays—probably (you never know with the 'phobes)—but odds are high that Mr. Kern, like so many straight men out there, has "depraved" sexual interests and fantasies that he absolutely, positively can't share with his wife. Because according to her, kinks that turn your face (and other things red) are for homosexuals, not heterosexuals. Kinks define homosexuality, according to Mrs. Kern.

And isn't that too bad for those heterosexuals who buy into it? Gawd, it must suck to be married to someone who views anything and everything that isn't vaginal intercourse as sinful and depraved. Don't get me wrong: I am not knocking vaginal intercourse. I'd dig it if I had a vagina or was attracted to people who do. But just one particular kind of sex with one not-very-indulgent person for ever and ever and ever? How depressing, how tedious. I'd hang myself.

Kern's comments came back to me late Saturday night while I was drinking a vodka & Red Bull in the lobby of a hotel in Chicago. The kid was spending the weekend with friends so the boyfriend and I headed to Chicago for International Mr. Leather, an annual contest/beauty pageant/dance party for the gay BDSM crowd. We're not interested in the pageant—we didn't know who won until we got home and looked at the website this morning (but congrats to Jeffrey Payne, Mr. Texas Leather and International Mr. Leather 2009)—and always assumed the event would bore us. But we have friends who go every year and they told us what a great scene it was—IML completely takes over a big downtown hotel every year and for three days turning it into the World's Biggest Leather Bar—so we went last year for the first time and such a blast that we were back again this year. This year's IML was at the Chicago Hilton and Towers on Michigan Avenue, which has a Belle Époque grandeur that provided the perfect backdrop for the decadent goings on. Forgive my bad cell phone picture of all the stunning men in the massive, ornate lobby...

My boyfriend's in that picture somewhere. And the dance party in the hotel ballroom—where Queen Elizabeth II dined on her first visit to the states as Queen—was amazing... 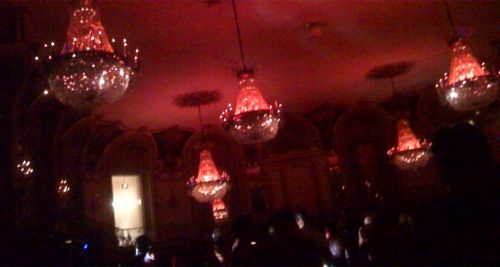 ...but too darkly lit to make out much besides the chandeliers. To see the face of the person you were dancing with you needed to retire to the foyer... 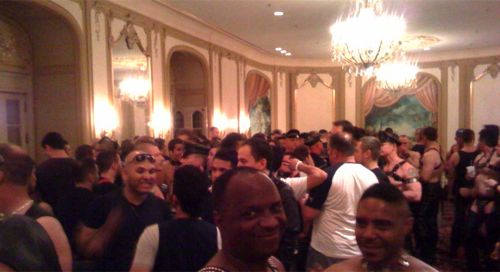 And here's what made me think of Sally Kern: Everywhere we went at IML—an event held up by the Kerns of the world as evidence that gay people are too depraved for marriage and family life—we met gay couples, guys who had been together for five, ten years, and twenty years. Some couples were there to look, some were there to play, and some, like us, had left kids at home with sitters or friends or grandmas. Because there's nothing mutually exclusive about conspicuous displays of wholesome family values—like baking peanut butter cookies for your kids—and attending IML and indulging in the kinds of (preferably safe) sex acts that so shock and repel and redden the likes of Sally Kern.

Instead of pointing to our homemade cookies to refute Kern's charges of sexual "depravity"—my first impulse, so many months ago, when reading her comments—we 'mos should point to our cookies and our occasional wild weekends. Because we can do it all, Sally. We can have our homemade peanut butter cookies and our commitments and our family values and our sexual adventures too.

Eat your heart out, bitch.