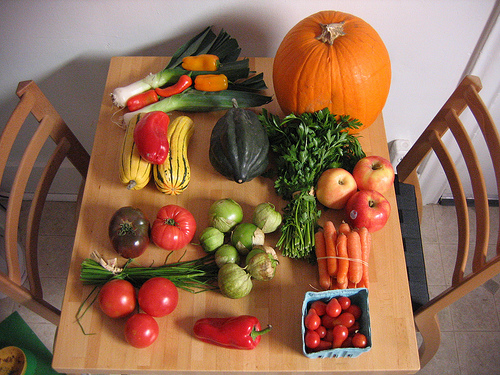 Many people seem to believe that farmers market prices are high.

I am one of these people. You probably are too. But some nice Seattle University students went out and proved us wrong.

This spring we measured prices at the Broadway and Columbia City farmers markets between May 10 and May 13. Armed with pencils and clipboards, students collected data on organic produce prices at the farmers market and neighboring grocery stores and co-ops...

In Columbia City, we compared farmers market prices to those at the Seward Park Pacific Foods Co-op (PCC) and the Rainier Safeway. The Columbia City Farmers Market beat the local competition on price for ten common organic produce items. Even having removed some extreme values from the data (those organic herbs sold in 2-oz. packages at grocery stores are quite expensive when converted to pounds), the farmers market prices beat the competition. The ten produce items available at all three locations averaged $4.25 per pound at the Columbia City farmers market, $4.97 at PCC, and $4.70 at Safeway...

If this seems familiar, that is because this is the third year of their comparison-shopping study—similar results in '07 and '08. Thanks, SU students (and professor Stacey Jones of SU's Albers School of Business and Economics)! And if you want to say thanks in person:

"From the Capitol Hill Farmer's Market (with the exception of the pumpkin). Portions of the bounty magically transformed into a super tasty squash/leek/pepper soup. yum. The apples will become part of a rhubarb crisp later this week"—photo from October 2008 by Fecki from The Stranger's flickr pool.