There's another challenge to DOMA moving through the federal courts, this one in Massachusetts. One of the plaintiffs in that case is the widower of former openly-gay Congressman Gerry Studds.

The plaintiffs are eight married couples and three widowers, each of whom is currently eligible for a federal program. Each has applied for a benefit under that program and was denied because of DOMA Section 3.... Dean Hara, the surviving spouse of late Congressman Gerry Studds, said "Gerry and I spent 16 wonderful years together and I miss him. The federal government's denial to me of Gerry's pension and health insurance added insult to injury at the worst time of my life. These systems are set up to help married people with the sudden loss of their partner, but instead of helping me, it hurt me."

Seeing as the plaintiffs in this DOMA challenge—all of them legally married in the state where they live—are suing the federal government after being denied federal benefits, federal benefits that would cost the federal government money, and seeing as the Obama administration is in California arguing that the state can point to expense as a justification for denying same-sex couples the right to wed (because "equal protections" only applies, it seems, when it costs nothing), it's hard to see the Obama administration turning around and refusing to defend DOMA in this case. The Obama administration has until June 22 to either defend DOMA in a Boston courtroom or refuse to defend DOMA. 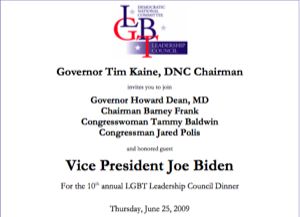 Three days after Obama screws us again—if Obama screws us again—I can't imagine that gays and lesbians will be in the mood to pay $1000 a plate to attend the DNC's annual LGBT Leadership Council fundraiser. Fuck that shit. I would hope that Barney Frank, Tammy Baldwin, and Jared Polis— the three openly gay members of Congress—would have the sense, decency, and spine to pull out of this event.

Because if Obama defends DOMA in Boston—and it's hard to see him not doing it now—gays and lesbians should be picketing this event, not attending it.

UPDATE: Please check out Americablog's constantly updated post about this. This is no longer an an argument about an over-stressed Obama administration—so busy with the wars and the economy and healthcare—doing nothing on gay rights. Now they're going out of their way to do real and lasting harm. The brief regurgitates arguments made by the religious right—gay people aren't discriminated against when it comes to marriage because we can marry opposite-sex partners whenever we want, just like straight people!—and makes unnecessary and uncalled for arguments in favor of a highly limited interpretation of Supreme Court precedents protecting the rights of gay people. The Obama administration is arguing against a right to privacy for gay people.