Signing Referendum 71 Will Cure Cancer, Bring About World Peace, Lower Taxes, and Give Every Girl a Pony 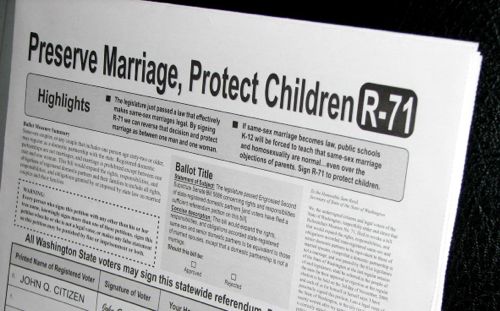 This morning, a thick envelope arrived in my mail box containing the Referendum 71 petitions that I requested last week. I already knew it would have a lot of fine print. But what struck me was the larger print. At the top of the petition—above the ballot title and official legal summary of what the measure does—there is a box titled "Highlights" with large bold type. Here they are:

• The legislature just passed a law that effectively makes same sex marriages legal. By signing R-71 we can reverse that decision and protect marriage as between one man and one woman."

Both statements are false, of course. The state Attorney General's office wrote the ballot title to accurately describe what the domestic-partnership bill, which R-71 attempts to repeal, actually does. The bill extends the rights of marriage, but, the ballot summary says, "Registered domestic partnerships are not marriages, and marriage is prohibited except between one man and one woman." The second claim is completely out of left field. "There is nothing in the bill that forces schools to teach homosexuality or that same-sex marriage is normal," says state Representative Jamie Pedersen, who sponsored the domestic-partnership bill in the state house. And state Senator Ed Murray, the bill's prime sponsor, adds: "There is nothing in the bill that requires anyone to teach anything."

Nonetheless, the lies are in larger, bolder type than the ballot summary—essentially upstaging the facts. How can they do that? Gary Randall, spokesman for the Referendum 71 campaign, did not return calls to answer that question.

"What you see here is the radical right doing what it does best, which is trying to create fear in the public by creating a parade of horribles which in fact does not exist," says Josh Friedes, spokesman for Equal Rights Washington.

But it's legal. Secretary of State's office spokesman David Ammons says, "The state supreme court has said you can lie in campaign utterances and campaign materials. We have no jurisdiction over extra words and sales pitches that sponsors choose to put on petitions." In other words, the Referendum 71 petitions could claim that the measure would ban abortion, impeach the governor, guarantee salvation... almost anything (short of threats or bribery) to persuade people to sign it.

"We are all for truth in advertising and voters getting clear and accurate information," says Ammons. "But we simply don’t have police power of what campaigns say about their ballot measure."