Democrats To Gay Americans: Fuck You. Now Write Us a Check.

Obama is defending DOMA in the vilest possible terms—comparing gay marriage to incest and child rape—and he refuses to use the powers at his disposal right now to suspend enforcement of DADT. Harry Reid, speaking for the Democratic majority in Congress, says there will be no legislative action on DADT. But, hey, we're all invited to the Democratic National Committee's LGBT Leadership Council's annual fundraising dinner! 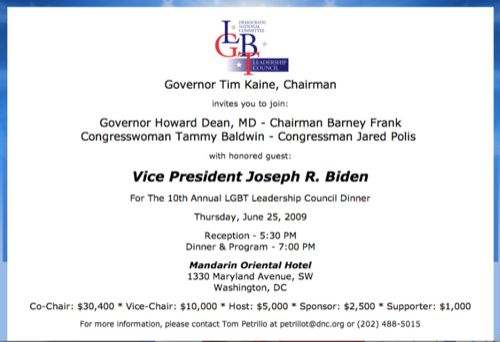 Pam Spaulding got her hands on the email invite sent out by Andrew Tobias, treasurer of the Democratic National Committee and an openly gay man. Tobias lists the gay luminaries planning to attend the DNC's fundraiser. Two of the luminaries on the list—David Mixner and Andy Towle—have already pulled out of the event. Others on the list—Keith Boykin, Billy Bean, reps from GLAAD, HRC, and NGLTF—should follow suit. And Pam is asking her readers to contact the event's biggest gay draws—Rep. Barney Frank, Rep. Tammie Baldwin, Rep. Jared Polis—and politely ask them to pull out as well.

Gay people still planning to attend this event—gay people who respond to the administration's personal attacks on them by writing a check—need to have their heads examined. Contact Barney, Tammie, and Jared, and ask them to pull out of the event and issue a joint press release detailing why they're pulling out.