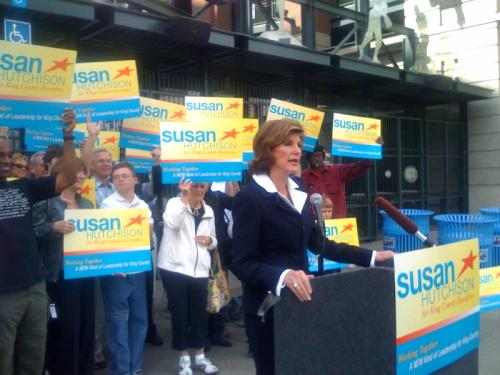 The elusive Susan Hutchison—a former KIRO news anchor and former board member of the right-wing, anti-evolution Discovery Institute—officially kicked off her campaign for King County Executive outside SafeCo Field this morning in front of a crowd of sign-waving supporters. Saying that county government “just gets in the way with burdensome taxes, regulations, and a 'no-can-do' attitude,” Hutchison said she would lobby the state legislature to increase the threshold for the state’s business and occupation tax from $28,000 of gross receipts to $250,000—a change she said would benefit “50,000 small business in King County alone. Huge relief for small businesses, but little impact to state revenues.”

Asked just how “little” that impact to state revenues would be, Hutchison fumbled momentarily through some papers on her podium before reading an answer. “The adjustment I’m proposing provides $110 million, which impacts only four percent of the total B&O tax revenues of the state"— $2.7 billion in 2007. Moreover, Hutchison said, the tax cut would stimulate business, “fueling our economy and resulting in higher tax revenues for everyone.”

“The politicians just love taxes,” she added—sounding, forgive me, a bit like Sarah Palin. “What we want is more people working, more people providing jobs, and more spending which then results in higher tax revenues from the state. Everyone wins."

Remy Trupin, head of the nonpartisan Washington State Budget and Policy center, seemed skeptical about Hutchison's lower-taxes-to-stimulate-spending proposal. Trupin noted that although “there’s been a long conversation” about raising the threshold before B&O taxes kick in, $250,000 was a higher threshold than “anybody I can think of” has proposed. “It’s sort of the argument that business makes whenever there’s an economic problem—just cut taxes—forgetting that one of the economic engines is government spending, and if you shrink government spending by that much you’re going to do more significant economic damage. Not to mention the damage to the lives of the people who use government services.”

In addition to promising to push the state to lower B&O taxes, Hutchison also proposed “expediting the permitting process for [new developments that] conform to our best environmental standards,” but was vague about what specific standards she was referring to. Hutchison avoi a recent forum held by the pro-growth management group FutureWise, and when the P-I’s Chris Grygiel asked her about her position on managing growth in King County’s rural areas, she responded evasively: “what I will do in King County is manage growth by bringing all the factions together. That is what I will do."

Hutchison has avoided numerous public forums and has been evasive with the media, and it's easy to see why: She isn't great on her feet, nor does she seem especially knowledgeable about how county government works (even at events like today's heavily managed press conference, which she was presumably prepared for). (She was ill-prepared in another way—her sound system didn't work, forcing press to crowd around her podium in a weirdly intimate circle.) Asked how she, as county executive, would be able to persuade legislators in Olympia where others had failed, Hutchison responded, "I love to persuade people toward the right position to go," adding that she is "tenacious" and would be willing to "go back over and over again and ... fight for the right [thing]." Asked about her positions on transportation, which she alluded to late in her speech, Hutchison vowed to be "the transportation executive," and said she is "a supporter of the entire transportation system. I'm always asked, what [transportation] mode do you support? I support all of them." That's fine as a matter of personal preference—Hutchison mentioned spending time riding light rail and subways in "Europe and other areas of the world"—but it doesn't have any relationship to the actual work of running a county, which involves, oh, actually making decisions about what modes of transportation to prioritize.

Hutchison promised more major policy announcements in the coming weeks. Meanwhile, one of her opponents, state Rep. Ross Hunter (D-48), issued a statement blasting Hutchison for taking her first public position on an issue the county has no control over, and another opponent, King County Council member Dow Constantine, said he planned to make a statement later today.