Life Inside the Box

Joel Egan, principal of HyBrid Architecture, thinks construction as we know it is waning—soon buildings large and small will be built off-site and delivered. “Construction techniques have been the same for over 100 years,” he says. “Everyone is building the exact same way: Thousands of little pieces, thousands of little sticks and parts are brought to a site. That is not sustainable,” says Egan. “That is like ordering a car and getting a box of parts dropped off in your driveway. It’s clearly time for construction to evolve.”

Cranes are hoisting 12 steel cargo containers onto a site in Georgetown today to create two three-story buildings designs by HyBrid, which only designs prefab buildings. They will contain about the 7,200 square feet of space, partly for an interior-design showroom. Here's what it will look like once complete: 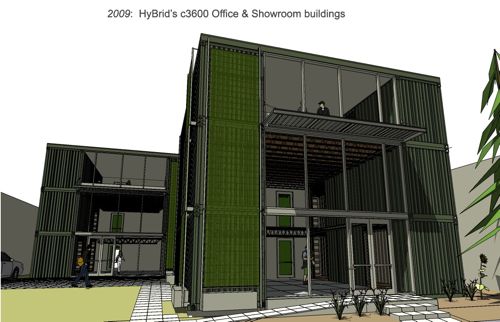 This design is an adaptation of a 2004 project, which never got built. An illustration of that building is below. 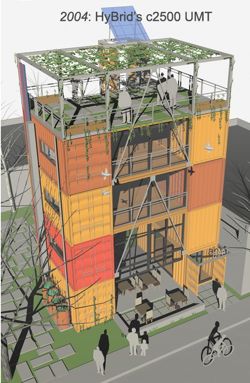 This modular construction alternative, Egan says, means buildings can be constructed more quickly, less expensively (20 to 40 percent less), and can be easily fitted to contain green roofs and other features to conserve energy. And they last longer, even if it’s not at the same location. “No one will ever take wrecking ball to a modular building because it makes more sense to cut the connections and disassemble it and relocate it,” he says.

HyBrid has also been partnering with Mithun Architects for the past several years to construct a massive modular 62-unit apartment building on Dexter Avenue North made of wood. The plans have changed slightly since we reported it in last year. “It’s got a new site … and it appears to be moving forward to essentially a bigger project,” says Egan.