Hi, Slog! I've been studying the law of our land at the University of Chicago for the last year (singular), which makes me basically totally overqualified for my weeklong Slog assignment: discussing the nomination and formal Senate interrogation (which begins in one hour) of Judge Sonia Sotomayor, future Supreme Court Justice. It's good to be back.

Let's not kid ourselves. Sotomayor is going to be confirmed. This is my cue to use the word "theater" disparagingly. But this genre of political theater is far more tense and interesting than the political conventions. Although Sotomayor will be asked to follow a script, she's a federal judge with a posh lifetime appointment, and she is not used to following scripts. She's used to bossing people around. (This is just a fact, though I should say that I don't completely discredit reports that Sotomayor is pricklier than many of her peers. Yes, it's easy to dismiss anonymous sources. But consider: Where do you think Jeffrey Rosen was going to find a former 2nd Circuit clerk who valued his/her legal career so lightly that he/she would be willing to shit-talk a future Supreme Court Justice?) In any case, it's fun to see a person who is used to terrorizing people submitting meekly to being terrorized, if only for a week.

I want the questioning to be brutal because it's good for our democracy—it takes an especially earnest kind of blindness to pretend that close decisions by the Supreme Court turn on anything but political (in the broad sense of the word) preferences. But I also hope for fierceness because, I have to admit, I had another favorite in the nomination process. Judge Diane Wood of the 7th Circuit, the de facto runner up, not only is a well-respected liberal on a conservative bench (a posture Sotomayor must attain on SCOTUS if she is to be influential), but also speaks multiple languages, plays multiple instruments, started teaching at the University of Chicago when the institution was quite hostile to women faculty members, and stitched this awesome cross-stitch, which hangs in the University of Chicago Law School library: 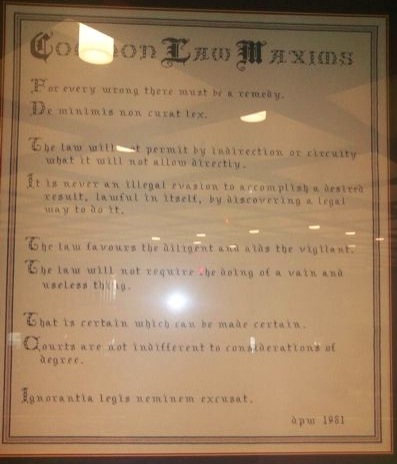 Judge Wood also taught me civil procedure last quarter. (Don't worry, I already got my grade, so I'm not sucking up.) So if she's so awesome, why didn't Obama choose her? Wood is older than Sotomayor (but no diabetes!), is white, and graduated from a less prestigious law school, so Sotomayor was no doubt seen as an easier sell. I still think that, in areas like search and seizure (see Cassidy v. Chertoff, a disappointing opinion by Sotomayor approving of random searches of ferry passengers' carry-on luggage and car trunks) and executive power, Wood would have been the stronger choice. But all that's over, and Wood is probably too old to be taken seriously next time around.

So, Sotomayor! Things to look out for in today's hearings and for however long they last: 1) Republicans playing the empathy card (the dyslexic firefighter from Ricci v. Stefano is testifying), 2) any hint that Sotomayor, with her background as a prosecutor, will be less sympathetic to criminal defendants than Souter was, and 3) drama. Any drama. In a room full of people with complicated motivations talking past one another, there should be plenty.

The hearing will stream live at newshour.pbs.org starting at 7 am Pacific time today. I gotta work like the rest of you, but I'll update when I can.