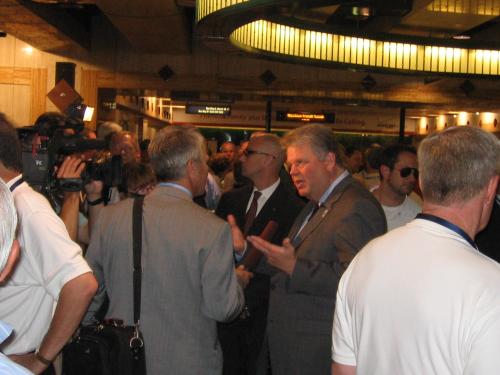 Two people showed up with bikes. One of them was Seattle City Council hopeful Mike O'Brien, who biked down to the event from The Stranger's offices, where he'd just finished an endorsement interview. The other person who showed up with a bike was me. After some confusion about where we could lock up our bikes (not a bike rack in sight), the good people of Sound Transit allowed us to bring our bikes onto the train. O'Brien took a picture of his bike hanging there. I took a picture of O'Brien taking a picture. 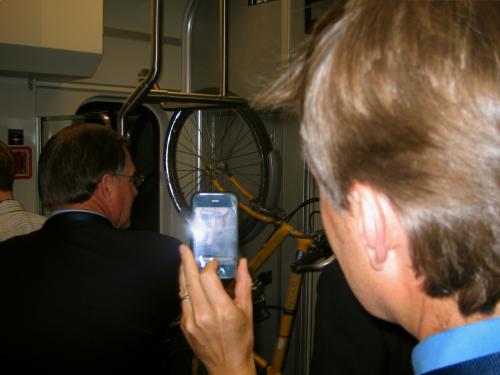 They really did seem like the first bikes that had ever been hung there: Whoever had designed them had evidently never tried putting a bike in it. The handlebars jutted so far into the aisle it was difficult getting around them, and as soon as the train started moving they swung dangerously at standing passengers. Several of the guys who had designed the visual displays in all the stations were standing nearby talking, and one of them was preoccupied by the poorly designed bike rack and kept talking about how he would reconfigure it. "I think you have to lose one of those seats," he said, pointing to a pair of seats across the aisle from the rack.

The trip to Tukwila was gorgeous, smooth, cool. (Dom and Jonah have covered this.) People waved.

At the Tukwila Station, everyone got off and then on again, and Mayor Nickels and Sound Transit CEO Joni Earl got into our car—both of them making polite, casual conversation with everyone. But Earl was clearly annoyed at Mike O'Brien's bike being in the way, even though it was in the place it was supposed to be, and at it swinging in her face once the train started moving again. Which was kind of satisfying, because all I wanted to do was call up the CEO of Sound Transit to complain about the bike rack, and there she was, being attacked by it. 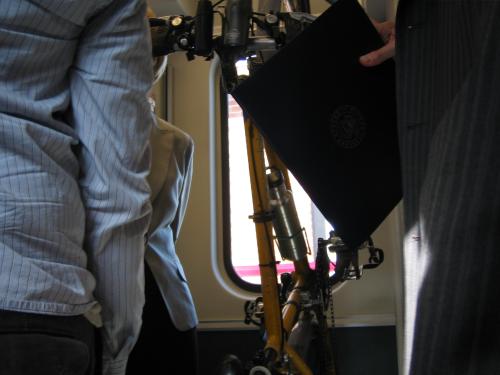 Earl's the figure in the cream-colored suit. "I don't know about these bike racks," she said to Rogoff, the Obama administration guy, who then pointed to me and said, "He's writing that down." Earl shot me a look and said, "Oh now wait a second, I wasn't talking to you, that was a comment." And then she shrugged it off. Mount Rainier passed by in the window behind her. The train turned, and turned again, and when I looked back at Earl she was once again being clobbered by O'Brien's bike. "I'm wearing the bike now," she said, laughing. And then, pointing to my notepad, she added, "You can put that one down."

Light rail opens to the public tomorrow, and it's free all weekend. It is easily the most important development in the life of the city in years. By all means, go. Just don't bring your bike.