Who Owns Bingo + Drag Queens In This Town? 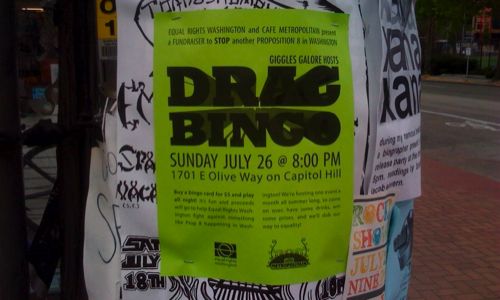 Washington state gay rights group Equal Rights Washington is hosting "Drag Bingo," a fundraiser at Cafe Metropolitan this Sunday night. Frank Percival, a board member at of Lifelong AIDS Alliance (and past board president), which hosts a monthly and long-running "Gay Bingo" fundraiser, isn't pleased. And he's expressing his displeasure on ERW's Facebook page:

I think it incredibly disappointing and in exceptional poor taste that ERW is bastardizing the original, longest running "Gay Bingo" in Seattle with this event. "Gay Bingo" is an important long running fundraiser for the thousands of our friends, family & neighbors in Western Washington living with HIV & AIDS. Why would you so blazenly plagiarize this important fundraiser, that is so crucial to the community?? A copy-cat event could cause damage to the original brand that Lifelong AIDS Alliance has invested years and considerable community support to build! I will not be attending the ERW event, and SHAME ON ERW for diminishing the importance of the "Decline to Sign Ref 71" with this thoughtless and poorly conceived fundraising scheme.

I highly doubt an additional bingo night to support an EQUALLY IMPORTANT LGBT issue would have ANY negative impact on the "original." If you feel there is a BETTER alternative to a bingo night (which, I might add... IS BINGO! Far from an original idea) then I suggest you get involved with ERW and offer up a viable alternative. Your negativity and cynicism is uncalled for....

Responding to Holt—testily—Percival stated that the work done by ERW is not "equally important" to the work done by the LLAA. "I think it a bit of stretch to equate [gay rights'] importance with a global pandamic that has already claimed the lives of countless milliions of people world wide," writes Percival. And then right after drawing a comparison between gay rights and HIV/AIDS and finding gay rights lacking, Percival insists that we shouldn't "compare the importance of these two very separate issues" at all.

The money raised by LLAA at Gay Bingo doesn't go to fight the "global pandemic," of course, but to provide services to people who are living with HIV/AIDS in western Washington. Which is important. It is, however, more than a little dishonest for Percival to hide behind the global impact of AIDS when defending Gay Bingo, an event that raises money for LLAA's local programs, again, and not to fight the "global pandemic." The impact of HIV/AIDS locally and the impact of the denial of, say, full marriage rights to gays and lesbians locally are equal or close to it. It seems to me that it's a bit of stretch—and an unseemly one—for Percival to point at the millions of dead worldwide to defend his drag-queens-and-bingo franchise in Seattle.

And who says there aren't enough drag queens and bingo cards to go around anyway?

But the last word goes to ERW supporter and former board president at Bailey/Boushay, Denis Stearns:

What truly diminishes the great work of Lifelong AIDS is someone getting ten shades of pissy, climbing on their soap-box, and throwing an embarrassing hissy-fit on behalf of the organization. Talk about counterproductive.

The whole exchange is here.