"The opposite of homosexuality isn’t heterosexuality. It’s holiness." 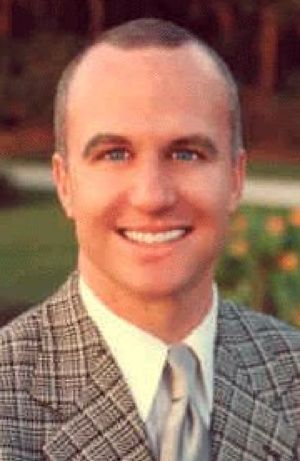 So says Alan Chambers, the president of Exodus International, the group that helps gays and lesbians "leave homosexuality." Anti-gay religious "leaders" and their nutjob followers point to groups like Exodus and to ex-gays like Chambers as proof that no one has to be gay. If we just dedicate our lives to Christ and pray our little gay hearts out Jesus will heal us and transform us... into what exactly? Not into straight people, Chambers admits in his new book Leaving Homosexuality. Chambers struggled with his homosexuality for twenty years, he says, and he's free now... not straight, mind you. Just, you know, free:

For so long I’ve heard gay activists say to me, “You’re just in denial. You’re not grasping the reality of the situation. You’re just denying who you really are.” The truth is, I am in denial, but it is self-denial. I’m not in denial of who I used to be. I’m not in denial of the temptations that I could still experience. I am denying the power that sin has over me. Sin does not have any power that we don’t give it, and what I’ve found is that my freedom—and the freedom of others I’ve known who’ve left homosexuality—was centered around denying what might come naturally to us regardless of how it got there. And once you deny sin’s power, you can live a free life.

So... I can dedicate my life to Christ and in twenty years or so the amazingly awesome power of Christ's love will turn me back into the miserable and tortured closet case I was in middle school? Or I can keep having sex with this amazingly hot guy who was fool enough to marry my sorry ass? Gee... let me think about that for a second. And while I contemplate my options please enjoy Queerty's thoughts on Chambers...

[Chambers is] perfectly suited to write, unconvincingly, about the subject of how he learned to reject his same-sex attractions over twenty years. Which sounds like the worst use of time spent on earth, well, ever.... But here's the rub: It's not that we've got anything wrong with Chambers decision to deny himself the pleasure of being gay. That's his call, and however ridiculous we find it, it's a personal decision we wouldn't want anyone telling us we don't have the right to make.

Where we fault Chambers, though, is through his work with Exodus: Advocating adults and young people (and their families) disavow the way their creator made them for a life of hating yourself so a man on a cross won't send you to hell. This man does not teach love and prosperity; he prescribes dangerous advice for malleable minds.

Okay, I've thought about it and I'm gonna to stick with—and occasionally to—the boyfriend. And may I add that Chambers' definition of "ex-gay" is more elastic than a power bottom's bottom. An ex-gay, according to Chambers, still wants to sleep with men. He just refrains from having sex with men. So technically I've been ex-gay all morning. Not straight, of course, because nothing can make me straight—not even Almighty Gawd—but so long as I don't have a dick in my mouth I am, according to Chambers, totally not gay. See how that works?