The clues are in the videos Sodini posted to YouTube. In the first video Sodini is showing us—or whoever the video was made for—around his two-bedroom ranch-style home. If you look at the books on his coffee table, which Sodini takes a moment to point out, one is titled Date Young Women: For Men Over 35. Sodini says "we're all familiar with" the books. Date Young Women: For Men Over 35—has there ever been a creepier title?—was written by R. Don Steele, a figure in the "seduction community," and was published by "Steel Balls Press." R. Don Steele also maintains a website, SteelBalls.com, where he sells his books. SteelBalls.com. A quick click through to SteelBalls.com makes it clear that Steele traffics in—and profits from—instilling false hopes in losers like George Sodini. ("Immediately improve your success with women! Everything is 100% guaranteed money back.") 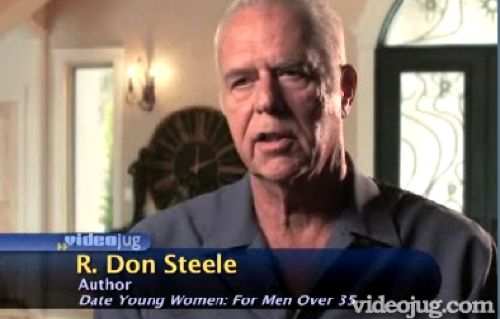 In the other video Sodini says, "RDS says I have 15 more years to be successful," and then mentions "forgiveness exercises, per Hay." That would nutty new age lifestyle guru Louise Hay, whose books are recommended at SteelBalls.com. So it seems pretty clear Sodini was following Steele's advice. And these video were meant to be viewed by other guys who had a joined an online support group for guys following Steele's advice on dating younger women. When Sodini goes into his extra bedroom he says that the tapes and CDs are things "I bought since joining the list." He makes several references to how "she"—the woman he will presumably meet following Steele's directions—is going to be impressed by things in his house.

"Somewhere there is a whole group of these guys doing exercises and getting ready for young women," observes a Slog reader, a recovering journalist, who has been digging into this all morning.

Sodini clearly felt that he was entitled not just to sex and a romantic relationship, but to sex and a romantic relationship with a much younger woman. And he was following the advice of a love-and-romance guru who encouraged him to hold on to that belief and filled him with false hopes. Not normally a problem, I supposed. But Sodini wasn't just another socially maladapted schlub furious with the world—and with women—for denying him all the 22-year-old ass he felt he deserved. He was a nut. And he couldn't understand why, if he was doing everything right, he wasn't finding the success that was Steele guaranteed him. He was employed, dressed nicely, in good shape—he even bought a matching sofa set. ("Couch and chair—they match, the woman will really be impressed.") But none of it worked—and his failure couldn't have been his own fault, since he was doing everything right, doing it all by the book. Unfortunately the book was Date Young Women: For Men Over 35. Someone needed to get Sodini a book that explained that settling down requires settling for and that young women are usually interested in young men and that we can't always have what we want and that there were probably women out there who would date him—maybe women closer to his own age—but only if he got his shit together and stopped obsessing about college-age women.

I am, of course, not suggesting that R. Don Steele's book made Sodini go shoot up that aerobics class. But it's clear that Steele was not the guru Sodini needed.

One particularly chilling detail from Sodini's online diary was his seething resentment for a neighbor. He had seen an attractive young woman leaving his neighbor's house and was absolutely furious that his neighbor was sleeping with the kind of hot young girl that Sodini himself wanted but could never get. The girl was his neighbor's daughter.

R. Don Steele offers one-on-one coaching sessions with "team members [who] demonstrate that they are following the Steel Balls Principles." I wonder if Sodini ever had a private session with Steele.