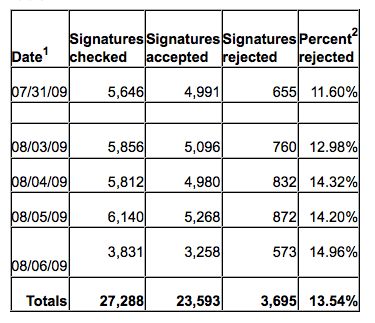 Election workers counted the highest percentage of invalid petition signatures for anti-gay Referendum 71 today. "It is almost 15 percent today and that drives the cumulative error rate over 13.5 percent," says secretary of state's office spokesman David Ammons. "The maximum error rate that they can withstand is 12.43 percent, so they are currently exceeding that."

Referendum backers need 120,577 valid signatures to secure a spot on the general election ballot; they turned in 137,689 signatures on July 25.

The most recent numbers were posted this evening on a new web page designated solely for reporting Referendum 71 updates. In addition to charts like the one above, the secretary of state's office will also be posting charts of invalidated signatures, explaining why certain signatures are tossed out. The vast majority are disqualified because the names don't appear on state voter rolls.

For the first time since officials started reviewing petition sheets last Friday, they have brought on a second shift of election crews. They will work until 10:00 p.m. each day and post the results of the second shift's counts the following morning, Ammons says. The two shifts will work though next week, updating their figures twice daily until the petition is qualified—or, as is looking more likely—disqualified.