Hempfest in a Teapot

Earlier this year, I called Hempfest a "patchouli-stained ghetto," which was a poor choice of words, I'll admit. But my point, as I wrote later on Slog and I reiterate in this week’s paper, is that countercultural celebrations and drug-legalization advocacy are mutually undermining ambitions. Hempfest’s board of directors became enraged and one board member wrote at the time, “I will do everything I can to make sure you are never invited back to speak at Hempfest." Indeed, the board voted last month to ban me from speaking at the event this year. So I’m not speaking at Hempfest for like the first time in a decade, which is weird. It makes me sad, but not bitter. I love Hempfest—rallies are an essential ingredient for most growing political movements—and I just want to see Hempfest accentuate the positive and eliminate the archaic tie dyes hanging from the stages. For the record, hippies can be wonderful people and I think Hempfest is a phenomenal marvel. So this weekend I’ll be going to Hempfest as a spectator for the first time since 1993, and I’ll be turning a blind eye to the prayer wheels and dream flags or whatever, and looking at the best aspects of the event. Here’s what I’ll be checking out: 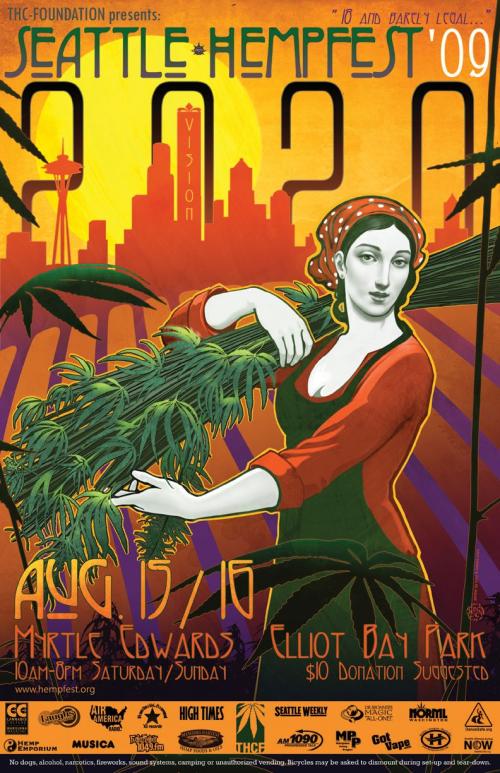 The New Guard: In May, high school junior Ian Barry gave an articulate speech in front of his class on how marijuana enforcement wastes valuable resources putting otherwise law abiding citizens in jail. Then Barry lit up a joint; Gig Harbor cops arrested him; he made national news; but he refused to apologize. Barry will speak on Sunday at 12:50 p.m. on the Share Parker Memorial main stage. Barry will also join a “hope of the DARE generation” panel at 2:20 p.m. at the Hemposium stage. We'll see if he was a one-trick pony of if he's got more to say.

The Elected Guard: State Representative Roger Goodman got his start in the public square as head of the King County Bar Association’s drug policy project; then used that platform—previously considered fringe, druggy radicalism—to springboard into elected office. His opponent had tried to smear him in 2006 for his drug activism, but that drove up Goodman’s polling numbers in the moderate eastside 45th District and he won election (and reelection last year). Goodman's stayed true to his roots and will be speaking at Hempfest on the main stage on Saturday at 4:55 p.m.

Music: On the DanceSafe electronic music stage, check out Brian Lyons, founder of Seattle house night Flammable, on Saturday 3:15 p.m. KJ Sawka plays on Sunday at 5:30 p.m. And on Sunday on the main stage, check out Tony B's Hip Hop Revue from 5:00 to 8:00 p.m.

Again, to all the people who think I hate hippies and think I want Hempfest to die: The opposite it true. Hippies are great, and the counterculture movement of the late '60s is largely to thank for the progressive politics in America today. Hippies worked hard to get Hempfest where it is. I know—I was one of them.

But none of those things change a simple fact: Hippies are the stigma of the movement to reform drug policy. As we know, hippies are infamous drug users (like all those famous hippies who died from ODs), and, thus, a festival that wraps itself in hippie artifacts and clichéd imagery appears to be motivated by the desire to legalize its vice.

Right now, people think pot rally = hippies. It's not true, but the jam rock and honky reggae = hippie vibe. Don't be a cliche! For example, think about how much it would suck if the health care reform rallies were led by welfare moms, or how unconvincing an NRA rally would be if everyone there had a firearms violation on their records.

If this country reforms drug policy, it will be for the benefit of society overall—freeing police resources, generating tax revenue, saving money on incarceration—not because the general population thinks hippies have a right to use drugs. Hempfest has an image problem, and if the organizers want to support the movement, they will work to fix it. In the meantime, it’s this weekend in Myrtle Edwards Park, from 10 a.m. to 8 p.m. both days. Donate some money when you go in the gate. Hempfest may not be perfect, but it’s an all-volunteer miracle, it’s part of an important movement, and it’s the best pot event in the world. But it can be better.