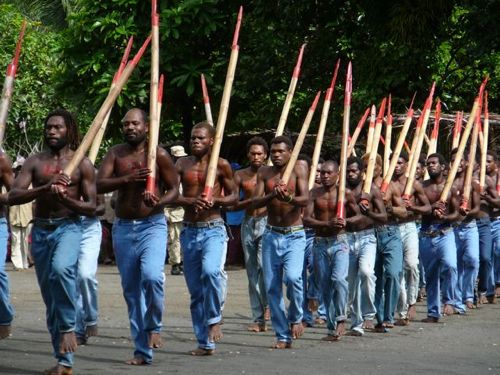 As the audience walked into the Hugo House theater last weekend, a man at the door handed out money: ones, tens, twenties, hundreds. "Will you hold on to this, please?" he politely asked. No one refused.

Mike Daisey's new solo show, The Last Cargo Cult, is all about money and one of the few places in the world where it has limited influence: Tanna, a small island in the South Pacific, 1,100 miles east of Australia. This past February, Daisey flew to Tanna for John Frum Day, a sacred pageant at the base of an active volcano where islanders reenact the history of the United States in song and dance. This year's pageant was nine hours long, including U.S. military drill routines and Barack Obama being chased by a dragon.

The shorthand history of the cargo cults dates them to WWII, when the American military built bases; impressed locals with their planes, guns, and radios; and left. The locals, wanting to conjure the Americans back, built meticulous reproductions of airplanes and rifles using natural materials. Cargo cultists in military uniforms still ritually gather at military command huts to tap on the keyboards of ersatz typewriters built from wood, grass, and coconuts. "The typewriters look like Underwoods," Daisey says.

The cargo cults are taught in college anthropology classes and written about in National Geographic. The cults fascinate Americans, Daisey suggests over coffee a few days before opening, because they stoke our narcissism. What could be more flattering than a religion that literally fetishizes our commodities? If radios are sacred, then every RadioShack is a sanctum sanctorum, every American is a high priest, and every engineer is a god.

But this self-flattering interpretation is bullshit. On Tanna, Daisey learned that the John Frum movement was a call to nationalism, worshipping not America but American independence and power. The Tannans chafed under repressive joint rule by the French and the English (a curfew for all black residents of the island lasted as late as 1979). In the 1930s, islanders reported a presence urging them to stop working for the colonists (as gardeners and housekeepers) and return to their native lives. John Frum Day, the high holiday of Tanna's cargo cult, takes place on the eastern side of the island, the side that is trying to resist money and maintain its barter economy. This imbalance siphons young people from the east to the west because, Daisey says, "they want to get stuff, and to get stuff you have to get money. They went from being priceless to being poor."

Toward the end of his stay on Tanna, the queen of the John Frum movement approached Daisey about an exchange program—she wanted Americans to come learn how to hunt and grow food. Daisey asked what the Americans could teach the islanders in return. Nothing, the queen said. She just wanted to help hapless Americans.

The people of Tanna, it turns out, may worship our stuff, but they pity us.