In a dance between federal and state courts, US District Court Judge Benjamin Settle has just announced that petitions for Referendum 71 will remain sealed until September 10, when he will make his final decision whether the names and addresses of people who signed should be made public. However, Judge Settle did release petitions to Washington Families Standing Together (WAFST), which, earlier this afternoon, filed a lawsuit in Thurston County Superior Court to challenge the validity of signatures that were accepted by elections officials.

"We made a motion ... that there was a public-policy interest in making the signatures available," says WAFST spokeswoman Anne Levinson. The petition sheets are necessary to prove the group's case that over 30,000 signatures were erroneously accepted by the Secretary of State's office, she says.

Levinson believes this suit has a much better chance than one filed last week in King County Superior Court (more info here), but tossed out because Judge Julie Spector said she lacked jurisdiction to rule on the case. "Judge Spector issued a very strong ruling, agreeing with WAFTS assertions that there were signatures and petitions accepted that were not in compliance with state law," she says.

Much of the lawsuit in Thurston County is identical to the last one. But the new suit contains additional arguments that the state accepted signatures that appeared to be invalid. Levinson says that based on observations of volunteer election watchdogs, up to 13 percent of the signatures accepted were invalid. The petition qualified for the ballot with less than one-percent margin of error. This part of the lawsuit filed today outlines some of the issues: 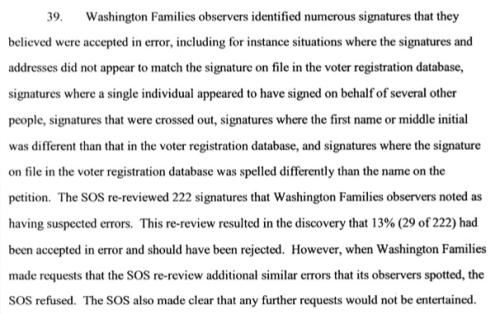 "Our fundamental concern is that the referendum process be done in a way that is entirely accurate and consistent with state law," says Levinson. "We’re not filing suit for the purpose of litigating or thinking people don’t have the right to a referendum or right to vote. We do think in this instance that the Secretary of State counted signatures that are not in compliance with state law and that this is important to pursue."

If the federal court releases petitions to the general public, gay-rights activists vow to publish their names and addresses in an online, searchable database.