We had City Attorney Tom Carr come into our office for an endorsement interview last week. In the first installment of our transcript, we asked him about a case involving the theft of a can of tuna that Carr had insisted was “urban myth” on the campaign trail. But once it became a big issue, he admitted the case did exist.

It gets to a sense that sometimes we don’t get the truth out of you and your office. It fits in with something that happened in 2005, when we were looking at filings for marijuana possession prosecutions by your office, and you had given the P-I information that you said showed that marijuana filings had no meaningful decrease between the time when I-75 was passed and then the present, which was a year after. And then it turned out that there had been a 60 percent decrease when I got the data from your office on marijuana filings. 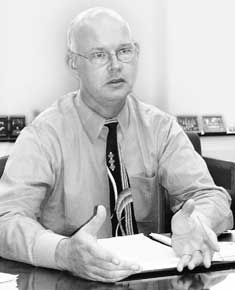 CARR: Well, as I’ve said—that charge, is a little unfair. I mean somebody asked me for the numbers right off the top of my head, and that’s what the P-I reporter did, and I shouldn’t have answered him. What I should have done was looked them up. But I thought I had them in my head, and I made a mistake…. and that one comes up all the time. So I have been punished for that.

It was just a mistake?

You were also contacted again by Mike Lewis and Eli Sanders, and you stood by that number.

CARR: Yeah, we had to go and run the data again, I guess. And I don’t remember—I remember scurrying around and being disappointed that I was wrong.

So I just wanted to clarify that. That it wasn’t just one offhand remark, but also defending something that you weren’t certain about.

CARR: But if the mistake was anything, it was answering a reporter’s question, and everybody here, except for Dominic, knows that I respond to phone calls.

Everybody here but Dominic?

CARR: No. I mean, Dominic is, he’s really nice to me when I talk to him, and then he writes the meanest things.

Is Dominic in this room? I mean, what does Dominic even look like?

CARR: You know, that’s the way I feel, and I do. We served together for what, five years on the marijuana policy committee? He was always very nice to me whenever we were in the room, and said nice things, actually at the end, thanked me for all the work that I did. And you know, I read the things in the paper.

But you’re from the Bronx, you’re a prosecutor, come on, that comes with the territory.

CARR: It’s not that I have a thin skin or that it bothers me at all, it’s just that I don’t feel I need to feed that. So what I do is I provide information when asked, but I’m not gonna take the time out to talk to someone who’s not really gonna take my words, and is gonna twist them.

So do you have—has he ever misquoted you, or put in information that’s incorrect, or does he just argue with your positions?

CARR: Well I don’t get the chance to answer it. Look at the story that he did on this race…

Can you answer my question though? Has he ever misquoted you?

When you’re misquoted you usually remember.

CARR: So he did a story at the beginning of this race, which was entitled something like ‘Tom Carr’s Gonna Go,’ or something like that, and he had apparently done extensive investigation on this, and he called me—he called me the night before the story was to run. I had fractured two ribs… so I had my assistant—Cindi Laws talk to him. I ended up having to talk to him again. And I was assuming this was part of a long-term investigation. And the story appeared the next day, with all of the charges, but none of my responses. Or virtually none of my responses, or my responses sort of cut down.

Cindi Laws, I spoke to her, and I included some of her reports. And when I spoke to you, the article was basically written.

Carr: That’s the impression that I got.

Yeah, but it was. It was basically done at that point. And I don’t think it’s uncommon for a reporter to begin researching and writing something in the morning, and essentially be done with it by the end of the day.

CARR: But to respond to Eli’s question, that is the fault there was I tried to respond promptly to a reporter. And I got it wrong. And rather than say no, I’ll look it up, but—I challenge you, have you requested information from my office and not gotten it?

Well, when I went back and looked at this story I had like a five page record of email exchanges with your office trying to get this information, and it being rather difficult in the end. The thing that honestly ends up concerning me here is actually your memory, right? You misremembered marijuana filings, right, which you were making a big deal out of at the time, that I-75 had no impact. You didn’t remember this tuna case, which admittedly is small in the scheme of things, but has been a huge issue in your campaign. You didn’t remember our date today [Carr didn’t have our meeting on his calendar, and showed up about a 40 minutes late after we called him on his cell phone], and you can’t remember off the top of your head what Dominic’s done to misquote you, which is also a huge thing.

CARR: Ok, you sound like a bad lawyer. You’re sort of putting a bunch of things from various together and trying to make a case.

The point of my questions about the tuna case was not to get to the questions about community court and so on, which I understand is something you can get into with the tuna case, but just to talk about your memory of events, and some things that you’ve said in public that haven’t been borne out as true.

CAEE: But I’ve made a lot of statements in public that are true, right?

Well, on balance? I would hope so.