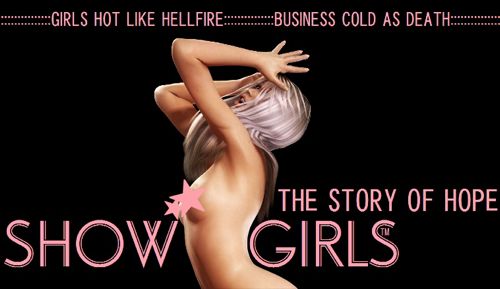 Earlier this week, the web was abuzz with reports of the forthcoming sequel to Showgirls: Showgirls 2: The Story of Hope.

On Wednesday, I checked the story with the actress who originated the role of Showgirls' Hope: Rena Riffel, who was name-checked in news reports as being on-board with the project, but who was as confused about what was actually happening as anyone.

Which brings us to today, and this just-conducted interview with Showgirls 2 writer/director Marc Volander, who strives to clear things up via email from Germany. Enjoy!

What inspired you to create a sequel to Showgirls?

MARC VORLANDER: I love Showgirls. It is Paul Verhoeven's finest work. Yes, yes, I know a lot of people are now laughing, but I'm very serious about it. I take Showgirls very seriously! To understand Showgirls, you have to know the European films of Paul Verhoeven. This film is a multilayered masterpiece—a dark satire of show business and also a dark mirror of Verhoeven's roots.

For me it's one of the most misunderstood classics. Beside the bad reviews at the beginning, it is one of the most successful blockbusters of all times with a total gross of more than $180,000,000 within 15 years. I dreamed about doing a follow up already in 1996 when I first saw it, but a sequel is not exactly my intention—my film is rather a reload of the Showgirls theme.

What drew you to the character of Penny/Hope?

I love the acting of Rena Riffel in general and she is still one of the sexiest hotties in the business. As an actress she is underrated and I always had the feeling that she deserves better than C-trash and dancer roles. I worked together with Rena several month on the pre-production of the film, then after some artistic differences we split.

I was shocked about the interview she gave to you, but now we are back in contact and we are now trying to work together again somehow. What she said in the interview..., yeah, I like her very special humor. However my film is not and was never about a character "Hope"...but perhaps the audience will dedect a reflection of this character in my film. Or not.

Will Showgirls 2: The Story of Hope be a German-language film?

We are shooting in German, yes. The first Showgirls was shot in the US, produced by Frenchmen, directed by a Dutch; it fits to film in Germany this time.

What should viewers expect from Showgirls 2: The Story of Hope?

More nudity. Brutal action. A great soundtrack. A bold style that never was before.

On our website you can't see a teaser trailer - all material is from test shootings that I did this summer in Las Vegas and Frankfurt..., so many people liked it so much, that we decided to publish it. Perhaps I will use it in the final film, because of the good reactions to it.

My soundtrack is produced by David May ("Superstar" # 29 US-Billboard Charts, producer of Laura Brannigan) and his partner Mow Marchionna. I'm very happy with it, because the quality is outstanding. Showgirls: The Story of Hope is a pop-musical as well and David will appear in a cameo role. In my opinion it's the best pop soundtrack of the decade.

My debut will shock the audience, in one way or in an other...and I will not appear at the Razzie Awards in person like Verhoeven!