Meet Matthew Cooke, a Stranger reader who has vowed to do everything The Stranger suggests for the entire month of February. Look for his reports daily on Slog and Line Out. —Eds.

I had the option last night of seeing Medeski, Martin & Wood, but after the last few days of theater and readings, that seemed too high-brow somehow. So, God help me, I took the option of Gums at Grand Illusion.

Lindy West promised a “fellatio-mad mermaid,” and boy, was she ever that. But Lindy hadn’t seen the movie, and so could not provide a plot summary. I will do so now. First, though, two warnings:

As they spasmodically disrobe, we discover the man is actually more in love with nudie mags, which seem to litter the entire beach. After pleasuring himself in an obscene way, he enters the water for a reinvigorating swim… but ends up getting far more “vigor” than he expected. 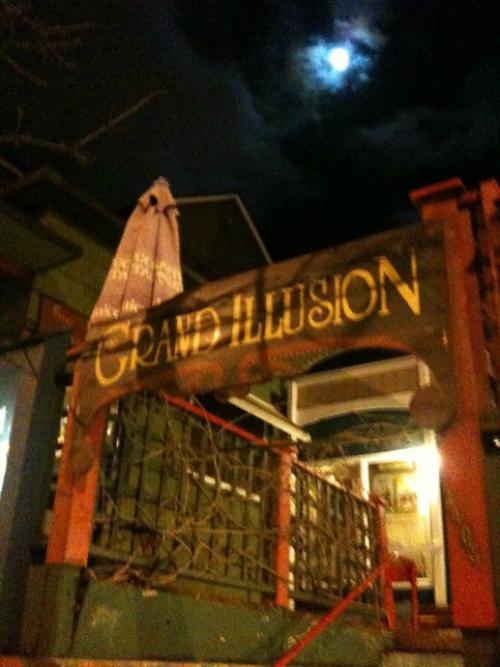 The next day, our hero, Sheriff Rooster Coxswain of Great Head Island, is baffled by a large, erect schlong that washes up onto the shore, detached from its owner. But he has a difficult time investigating the case. He is first side-tracked by the amorous affections of his wife, and then shortly afterward, the oral fixations of his secretary. Also, the town mayor seems uninterested in the public’s safety—or his own, rushing headlong (so to speak) into the surf at his earliest opportunity.

Help eventually arrives in the form of Captain Carl Clitoris. The Captain is prone to bizarre rambling, and can barely be understood through his thick German accent, but eventually we understand that he can help capture the offensive sea creature. His Nazi uniform and obvious insanity give Sheriff Coxswain pause, but he can sense Clitoris is the man for the job. For additional backup, Coxswain contacts his old friend Dr. Sy Smegma, a noted oceanographer and pervert. Dr. Smegma is reluctant to leave the comfort of his S&M palace, where naked women continually whip and caress his hairy buttocks, but he can hear the desperation in Coxswain’s voice. So he packs up his blow-up doll girlfriend Nancy and proceeds directly to Great Head.

I did notice a few “holes in the plot,” as they say (sorry). The mermaid seems to leave her victims dickless, dead, or both, and thus I’m not sure why so many of the men—and women—of the town seek out her affections. Also, several of the main characters turn into puppets during the film’s climactic finish, for no discernable reason. But there is girl-on-girl sex, (implied) guy-on-guy sex, dog sex, puppet sex, blow-up doll sex, and, of course, underwater sex. And so, in the end, if you like sex—or Jaws, or deranged, spike-dicked Nazis, or women popping out of toilets—you will love this film as I did. Recommendation approved!

Slog PM: Equality Passes the House, We're Staying in Phase 2, What Gender Is a Potato?

My Beef With a MOHAI Exhibit Does Not Diminish the Importance of Dr. Abe's Excellent Book on the History of Local Hiphop