Yesterday The Stranger Suggested: Dinner (or Lunch) and a Movie

Meet Nadia Abdelrhman, a Stranger reader who has vowed to do everything The Stranger suggests for the entire month of March. Look for her reports daily on Slog and Line Out.—Eds. 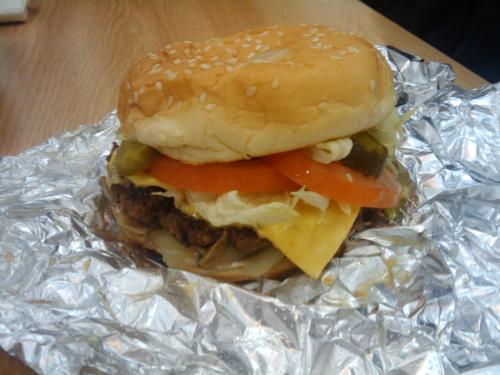 After I spent Monday night mired in drunken stupefaction of Everything Is Terrible! and two pitchers of beer (I spent nearly all of February dry—my tolerance severely weakened), I was way too hungover to even ponder whether last night's suggestion of dinner and a movie in Northgate's Thornton Place could possibly be the most entertaining thing to do around town.

We arrived at 7 p.m., resigned to the notion that we would not have time to do all of the eating (we had resolved to hit up both Tengu Sushi and Five Guys Burgers and Fries) AND catch the 7:30 showing of Shutter Island. Fortunately the bustling Tengu Sushi is made of a machine whose sole purpose is to tantalize your senses with dead sea creatures on a collision course with your gullet. We inhaled eight plates of cheaply priced sushi and left within 20 minutes (due to a shortish wait for seating), so Bethany was right. My buddy bought a burger and fries at Five Guys while I purchased the tickets, and when I returned, I found him admiring a deliciously grease-stained brown bag brimming with fries, which I immediately smuggled into my purse for theater eats.

At any rate, conveyor-belt sushi appetizers, burgers (don't forget the Cajun fries), and a movie for dessert was already tasting pretty good to me.

Too bad I didn't actually love Shutter Island all that much. I recently read an interview with Leo DiCaprio in which he likened his role in the film to an emotional layer cake. And guess what? After Leo is done digging through his emotional layer cake, he serves it in a big, stale pile—to you, the viewer. My buddy off-handedly guessed a central (and ostensibly hidden) plot conceit about 30 minutes in. Although, I did win our bet about Elias Koteas from TMNT (Casey Jones, y'all!) playing the crazy dude with the staple-laden scar on his face—homey thought it was Christopher Meloni.

All and all, last night was an easy come down, so recommendation approved... if you had absolutely nothing to do and a hangover to nurse, like me.