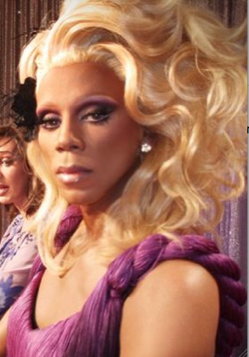 Has this week's lack of a new episode left anyone else with RuPaul's Drag Race withdrawals? In the absence of new information, let's review some facts.

1. So far, Season Two has been delightful. However, a withdrawal-based review of Season One has me wondering if the new season will reveal the sort of solid-gold humanity that was in such extravagant supply in Season One. Granted, we didn't come to know the wonderful depths of Bebe Zahara Benet, Nina Flowers, and Ongina until the latter half of the premiere season, so maybe my doubts are premature. (Season Two's clearest candidates for Bebe/Nina/Ongina-levels of star quality mixed with beautiful insides: Pandora Boxx and Jessica Wylde, the latter of whose "coke-eh-dordle-darr!" chicken impersonation haunts my dreams.)

2. No matter the brilliance of the contestants, the true winner of every episode of RuPaul's Drag Race is Ru-fucking-Paul. (See photo above, from the blog of Santino Rice.) Seriously, she's just the best—the prettiest, the wittiest, the fiercest. For a remedial course in RuPaul's eternal brilliance (as well as how far she's come), here's the now-almost-20-years-old video for "Supermodel (You Better Work)." Seeing a drag queen playing basketball on MTV in 1993 almost made me weep.