Looks Like the Real Thing: A Review of Gorillaz's Plastic Beach 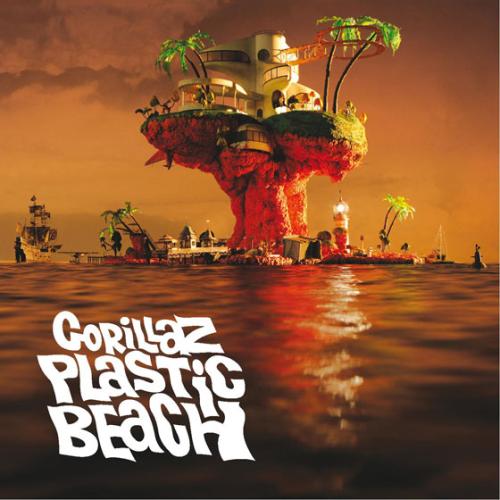 I've always been sort of a casual fan of conceptual cartoon band Gorillaz. I'm pro-Damon Albarn in general, and I've often enjoyed his omnivorous, adventurous outings (and well curated collaborations) for this project, and I like Jamie Hewlett's design concepts and animation as much as the next guy—but I never really listened to more than the band's singles and remixes thereof. I don't have the graphic novel, I hadn't even watched all the official videos until I went on a spree last week. All of which is to say, I didn't approach their new album Plastic Beach with any great expectations—but I think it's a great album.

The cartoon plot behind the album, as I understand it, is that the Gorillaz got into some trouble back on the mainland and so have had to flee to the Plastic Beach, a man-made paradise/floating fortress that appears, in Hewlett's absorbing models, to be made out of discarded junk and washed up detritus. If this doesn't immediately make you think of the great plastic gyre in the Pacific, then you're just not paying enough attention/worrying about the end of the world. Indeed, the overarching theme of the album seems to be about the environmental (and maybe just mental) damage done by our/capitalism's endless desire for ease and convenience and our willingness to accept cheap substitutes rather than the real thing (the irony of this message being delivered by an imitation of a "real" band has not likely escaped anyone involved).

Sara Nelson’s Sobriety Changed the Way She Thinks About the Homelessness, But It Hasn’t Changed Her Policy Prescriptions

SIFF 2021 Review: THERE IS NOT A SINGLE CHILL MOMENT IN THIS ENTIRE MOVIE!!!