I've been in San Francisco, where the buses are dirty. The windows and walls are scuffed from graffiti and abrasive cleaners. The seats are approximately as soft as granite. Some floors are carpeted in trash. The roofs leak. 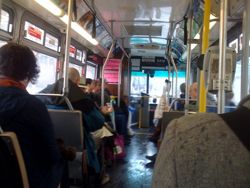 Here's a bus in a rain storm. The floor is wet, in part with footprints from outside, but mostly because the ceiling was dripping. You can see the water drops on the guy's coat in front of me.

These shitty buses are packed from dawn to midnight with the wealthy, the poor, the stable, the crazy—oh my, are some of those people crazy—even though the buses are gross. They're way more packed than Seattle's comparatively sterile, cushioned buses.

True, the population density is greater in San Francisco and buses there are part of an integrated transit system of subways, trains, and streetcars, but riding the bus in San Francisco is better than riding in Seattle for two simple reasons: (First) They arrive with shocking frequency. The most popular routes at the busiest times of the week bring you a bus every four minutes. Many run every seven minutes. Some routes at off-hours only come every 30 minutes, but those are the exception. (Second) Many of the bus stops are outfitted with LED reader boards that tell you how long till the bus comes. Basically, riding the bus is about traveling to your destination, not about waiting for the bus—wondering if it will ever come, like in Seattle. People will ride a disgusting bus if it's the best way to get around.

Seattle doesn't have enough buses to do this. But by comparison, our buses are really nice: clean, cushioned, dry (even the #3, #4, #358, etc.). Seattle should adopt the dirty-old-bus model to save money and operate more buses. You can wait even at 5th Avenue and Pike in Seattle—where the schedule alleges that five different routes will come—as I did last night at about 8:00 p.m., for 15 minutes without a single bus arriving.

The aesthetics of a bus are worth fuck all if you don't know how long it's going to take to arrive. I'd happily switch to having lots of shitty buses that come more frequently. Also, more ballsy public-health messages on buses like this would be great: 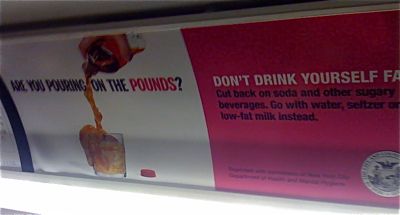