Mmm... Delicious... You Must Have Stepped In Vomit On Your Way to the Airport, Am I Right? 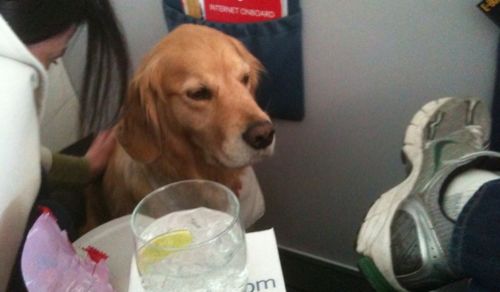 After the presumably crazy lady falls asleep I ask the flight attendants WTF?

"It all went downhill after they started letting children on planes," says FA #2.

And, yeah, I know—first class, bitches! I had a complimentary soda water served to me in an actual glass and a complimentary bag of Sun Chips served to me in an actual bag of Sun Chips and an actual asthma attack courtesy of the presumably crazy lady and a huge yellow dog sprawled out at the floor on top of my feet. The dog LICKED MY SHOES after the presumably crazy lady went to sleep. Which as every knows is dog for, "Hey, man, I don't like the crazy lady anymore than you do. Got any food?"