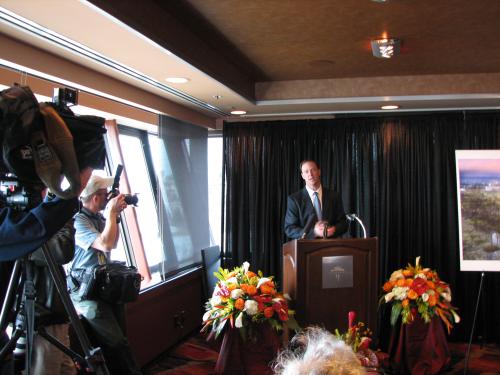 An hour later I was on the phone with Space Needle CEO Ron Sevart, asking why, this late in the game, his organization is sending out benign press releases when for the past year—when there was real news to be reported—they were silent. I also asked him if recent layoffs at the Space Needle indicated that the Space Needle was losing money or channeling its funds and energy into the Chihuly project.

Sevart explains that the Space Needle LLC is now willing to submit a Request for Proposal (RFP) for the Fun Forest site if that's what it takes to get the public on board—hence the press release. "We want people to know we're hear to listen," he says, adding, "actually, in the fall we were surprised that more people didn’t know about [our plans]. The process started a year ago," when Jeff Wright handed him the Seattle Center master plan and said, "find me a way to activate this space and bring people to the Center—and make sure it aligns with the master plan."

Of course he said that. And your first thought was, Dale Chihuly will bring the people together?

"We had other ideas," Sevart says, "but none of them passed muster... it needed to be diverse and artistic, and engage families." He declined to comment on some of the other ideas that failed to pass muster.

Sevart also declined to address why the Space Needle Tour Guide program was cut last summer without notice, according to sources, putting a number of employees (he wouldn't state how many) out of work. There was a ticket price hike in the past year and remaining employee hours have also been drastically cut. This seems to indicate that either the Space Needle is losing money or the Space Needle LLC has been funneling its resources into the new Chihuly Museum project for awhile now. "The Space Needle had a wonderful year last year," is all Sevart would say. "Things continue to evolve."

But if the process has been going on for a year, and if the purpose of designing a Chihuly Museum is to engage the public more fully in the Seattle Center, and if the Space Needle LLC was surprised about how no one knew about their plans, why didn't they send out a press release sooner (a useful one)? Or rent a plane and write the goddamn news in the sky for everyone to see?

"We’ve been following the leadership of the Seattle Center through this process," Sevart says. Again, if the goal of the Space Needle LLC was to enhance the Seattle Center master plan (which was developed over two years with the input of over 1,000 people—and has the Fun Forest area designated as open space), wouldn't it have been a good idea to actually involve the public?

"From our point of view we weren't operating in stealth mode," Sevart says, and in the end their project is good for the people and for the city. "By the end of this process we will have generated over a million dollars a year for the city through rent and admission taxes. Two million dollars of project costs will be spent on improving the outside [of the space]... there will be a glass house and a neon saffron tower. Over fifty percent of the space we're developing you don't have to buy an admission ticket to enjoy."

But that's not what the architect said at a press conference three weeks ago. The architect says most of it is paid admission—the museum will be enclosed—but maybe Sevart is suggesting that people can enjoy the art through the museum's porous walls?

Hurrah, but what if the people don't want a Chihuly Museum where their park should be? "If there’s a better idea out there," he says, "we’d like to see it."

So what now? The Seattle Center and the city council Parks and Seattle Center committee (chaired by Sally Bagshaw) have a public meeting scheduled to discuss the Fun Forest site on March 30 at 6:30 p.m. in Center House Conference Room A.