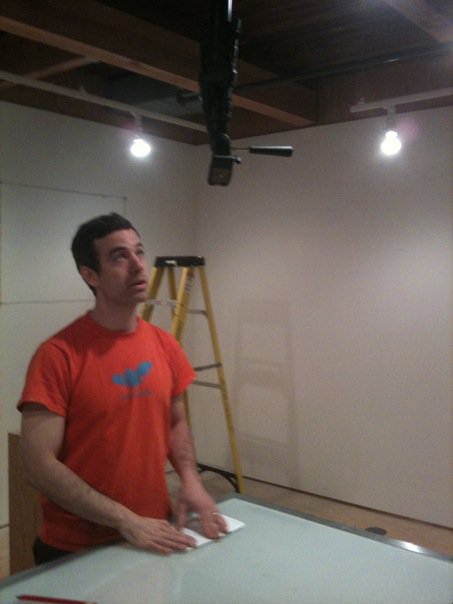 One of the best and most important shows in Seattle last year was Corin Hewitt at Seattle Art Museum, and yet I found something to complain about: The photographs on display were taken during a performance in Portland that was part of a performance series that also continued at the Whitney Museum of American Art in New York, where Hewitt set up an entire studio, kitchen, and gallery space inside the museum. I wanted to see the whole performance in Seattle, not just the photographs resulting from and extending the performance. 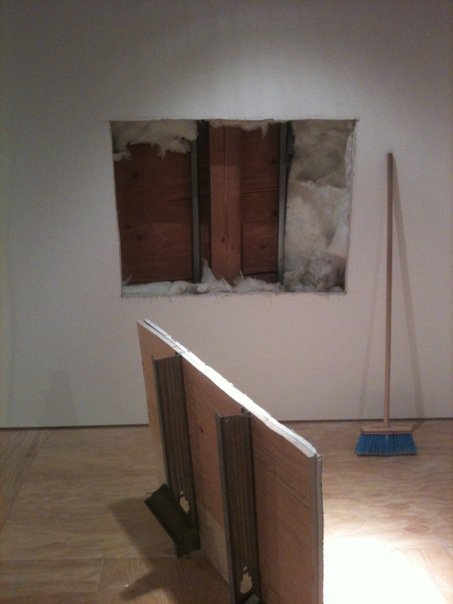 Corin Hewitt is spending today, Saturday, and next Thursday through Saturday (12-5 pm each day) at Western Bridge, where in the back room on the second floor, he's performing a slow, improvised examination of the material of the walls of the gallery.

He's made three cuts out of the walls. The idea came to him from his past work as a plumber. When he'd go inside the walls, he'd often find a newspaper or photograph hidden there. He was always hoping to find out more about the laborer who built the wall, so figuring future plumbers might feel the same, he started making biographical packets about himself and planting them in the walls in the spots where he worried that his work was weakest—the spots where someone, someday, might have to reopen the wall and make fixes.

"I'd make a packet of photographs, work I'd done, writings about what I'm doing in my life, here's what my art is like right now, here's how to contact me in the future," he says. "I'd seal it up and then rebuild the wall. I'm doing that here, too, so that whenever this place is demo-ed, that'll be a part of the conversation of the material of the place."

But the performance while he is here is not just a way to generate a time capsule; the product is secondary. It is a continuous process of sculpting, making photographs, and making video—all at once, and for an audience. 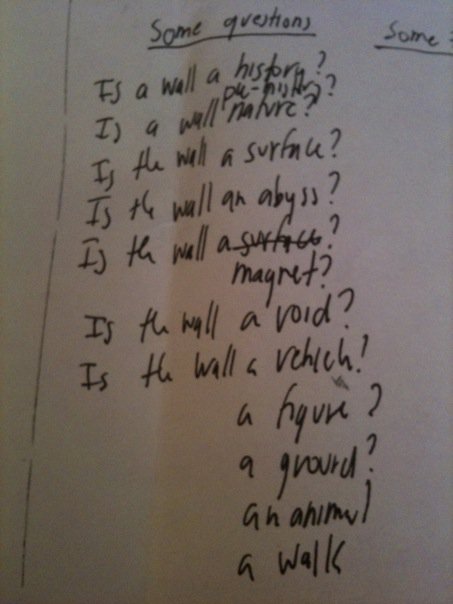 On a light table with a video camera mounted above it, Hewitt will be in the gallery, working with the wall pieces, creating sculptures out of the raw materials of the walls (sheetrock, paint, joint compound, and tape), incorporating stock photos of those materials (pictures of sheetrock, pictures of gypsum mines), taking new photographs, and recording everything on the video, which will be live-fed onto the wall outside the gallery. It won't always be clear when you're watching the feed whether you're looking at an object on the light table, or an image of an object; a sculpture or a photograph, or some combination thereof.

In his notes for the project, Hewitt scribbled the quote (I don't know where it's from), "In order for an image to truly sit or project on a wall there must be no continuity between them." He wrote himself "some questions." It starts there.

Definitely do not miss this. Hewitt's art is hard to describe, but deeply sympathetic and even poignant.

I'll be there next Thursday afternoon if you want to watch together.

Sundance 2021: A List of Every Film We're Excited to See at the Fest

Biden's Signin': Here's What the Executive Ordered During His First Full Week in Office