Are Chihuly Fans Being Bribed for Their Support?

Fans of a new Facebook page and website called Chihuly at the Needle, an advocacy entity in favor of constructing a Dale Chihuly glass museum at the Seattle Center, have been thanking the group for gift cards to eat at the Space Needle restaurant. The owners of the Space Needle, the Wright family, are the same people behind the museum. Here's a screen grab of the Facebook page: 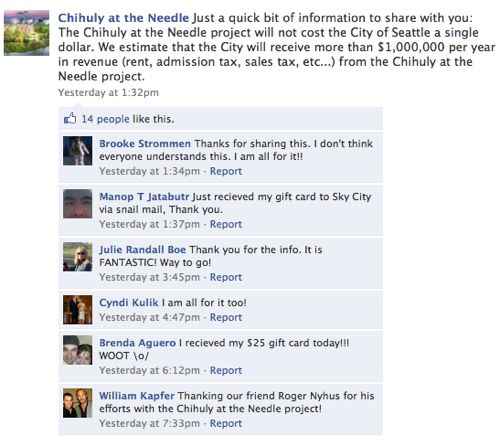 Who is behind it remains unclear, officially, as the page lists no creator and the adjoining website also lists no contact information. However, PR strategist Roger Nyhus—who people thank in the thread shown above—has been involved in plugging the project on Twitter and has been the subject of gratitude for "working so hard."

At the public meeting last night, Cienna Madrid spoke to an employee of Nyhus Communications who confirmed that the firm is indeed representing the Chihuly museum project.

According to a reliable source reached this afternoon, the group posted a notice that said people had to be a member of the group to qualify for the gift card; they were asked to send a letter to the Space Needle to claim the gift card. However, no such notice is currently on the Facebook pace.

Two calls to Nyhus asking about his role in the project and asking why fans of the page are apparently receiving gift cards to the Space Needle restaurant have not yet been returned.