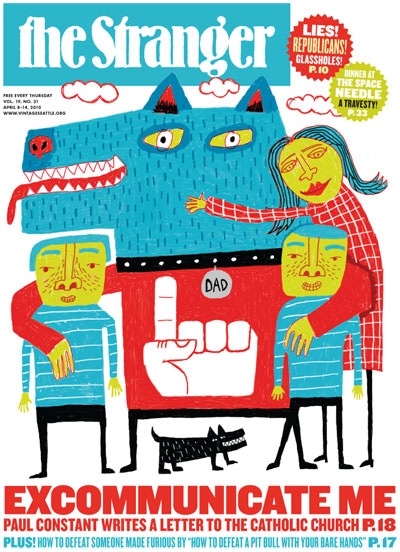 Sidebar! How to Get Yourself Excommunicated without Leaving the House
"Explain why you don't want to be a member anymore in as much detail as possible..."

The Chihuly Museum Glasstroturf War: PR Lies, the Public Outcry, the Republican Connection, and More
"Profits from a Chihuly museum seem likely to be spent against Seattle's interests..."

Meanwhile, Bethany Jean Clement Eats Dinner at the Space Needle
"What they do to a pork chop at SkyCity ought to be punishable by law..."

David Schmader on How to Defeat Someone Made Furious by Last Week's 'How to Defeat a Pit Bull with Your Bare Hands'
"Here are some tips on how to defend yourself against angry, easily startled, logic-ignoring, foaming-at-the-mouth pit bull lovers..."

Jen Graves Profiles the Artist John Grade
"Grade is not a cowboy or a mystic or a transcendentalist. He is not Henry David Thoreau or Jean-Jacques Rousseau or John Wayne—though he's a tiny bit of each..."

Paul Constant on Corporate Euphemisms, Accusations of Bullying, and Other Tensions at Seattle Public Library
"The advisory committee isn't the only place where librarians feel silenced..."