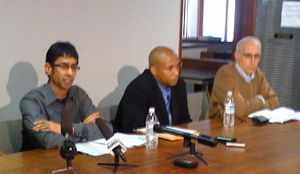 At a news conference held this morning on behalf of 15 organizations, local leaders chided the city council for willfully ignoring warnings about an aggressive-solicitation bill and said they would closely monitor its implementation if passed. Asked if the groups could foresee legal action to challenge the bill, James Bible, head of the local NAACP chapter, said, "I could see us testing the law in a myriad of ways." He added, "I think it would be an open question. Many things could be done to test the bill's implementation."

The bill may be legally weak. The Seattle Human Rights Commission has sounded alarms that the bill, sponsored by City Council Member Tim Burgess, contains due-process problems for defendants, and grossly misrepresents data—it makes statements about increasing aggressive solicitation and growing complaints that are either unsubstantiated or evidently false. This raises questions whether the bill withstands constitutional muster. A government must have compelling interest in restricting free speech; moreover, a law that impacts speech must be narrowly tailored to address the problem.

"This is being portrayed as a kinder, gentler enforcement," Narayan said, "But it is really not. It's worse than the [existing] criminal law because defendants don't get an attorney in proceedings." The problem, as the commission notes, is that issuing a $50 citation under this law would give police a lower burden of proof that a criminal law and provides suspects no right to legal defense, but suspects could easily wind up with a criminal charge if they don't pay the fine or fail to show up in court (likely for a homeless person). The existing aggressive begging law, a misdemeanor if convicted, requires evidence beyond a reasonable doubt and defendants are entitled to legal counsel.

San Francisco passed a similar ordinance to Seattle' proposal that "cost millions of dollars, most of the people affected were people of color, and most of the charges were thrown out," Narayan continued. "This is a case where the government says, 'Trust us,' but this sets up a law that is ripe for abuse."

The complaints appear prompted by downtown business interests that have been lobbying for this law for years, and brought their campaign to crescendo in recent weeks. "Emails and complaints about aggressive panhandling were few and far between until this campaign began to pass this ordinance," said City Council Member Nick Licata, who voted against the bill in a recent committee meeting. The council, nonetheless, looks prepared to pass the bill.

"The human rights commission report has not received sufficient attention form the council," said Tim Harris, executive Director of the homeless newspaper Real Change. "The council needs to slow down before they pass this law."

Slog AM: Nationwide Protests Demand Justice for Daunte Wright, Big Pig on Mend, and Q May Be a Former Drama Kid from Mukilteo