This Week in Film: Kick-Ass 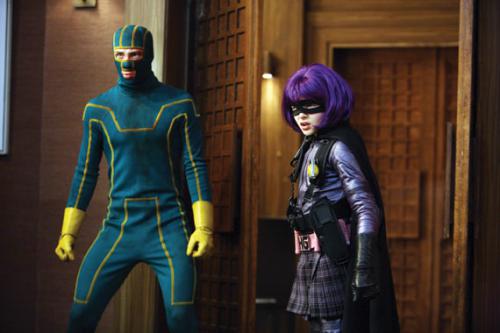 Every so often, Kick-Ass (the Matthew Vaughn—directed adaptation of Mark Millar and John Romita Jr.'s real-world-superhero comic book) sparkles with a fanboy wit that threatens to poke holes in the entire ridiculous idea of superhero movies. Aaron Johnson's Dave Lizewski is your standard funnybook nerd (of the skinny-kid-with-an-Afrolike-haircut variety, not the overweight-kid-with-overly-stylish-glasses version), who gets the idea to put on a costume and fight crime as a hero named Kick-Ass, less because he wants to do right in the world and more because he thinks it would be supremely cool. And there's not much more to the movie than that: Kick-Ass fights bad guys and teams up with other superheroes, and then they all battle their way up to a confrontation with the Big Bad Guy. It could be the plot of a video game from 1987.