Poll: Voters Want to Create Income Tax for the Rich, Fix Regressive Taxes for Poor and Middle Class, and Eliminate the B&O Tax for Small Businesses—So Why the Hell Hasn't the Legislature Done It?

SurveyUSA released the results of a poll yesterday that asked 500 people in Washington state this question:

A proposed initiative would create an income tax in Washington state on people making $200,000 per year and on couples making twice that. It would also cut the state's portion of the property tax by 20%, and end the business and occupation tax for small businesses. Do you support? Or do you oppose? This proposed initiative?

Here's how they answered: 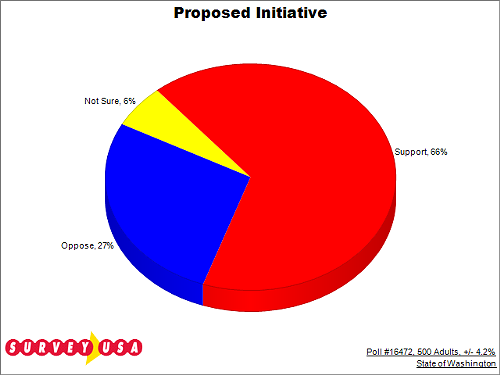 Pretty overwhelming. Pretty, um, uncontroversial. But the idea's not new. This initiative, sponsored by Bill Gates, Sr., is obvious. Washington is notorious for its regressive tax structure that leans heavily on folks who don't have a lot of money—which helps fire up people to support Tim Eyman initiatives—and leaves our state vulnerable to massive budget deficits from lost sales tax revenue when spending drops. The Gates initiative would help fill these gaps, including restoring an estimated $700 million in education funding.

"A good tax system should distribute the burden of taxation across taxpayers in a way that is considered fair and equitable," the commission concluded.

So what did the legislature do from January through early April—in a session dedicated to fix our budget?

Lawmakers suspended Eyman's I-960 (which prompted him to file another version of the same initiative, which he's already raised $56,328 for) and bumped up a patchwork of taxes that mostly affect middle-income consumers. They didn't get to the meat of the problem.

Our state has been studying ways to fix the tax structure since the 1920s. And when the Gates commission did its work, it noted that it wasn't "responding to a particular problem or crisis." The legislature didn't act in the following years of prosperity. But this year, our state actually had a crisis (and last year, too) but the legislature still didn't do it. We had multi-billion dollar shortfalls both years. Both times the legislature basically said: We're just focusing on the budget.

But instead of focusing on ways to overhaul our broken tax system, the legislature weaseled out. Specifically, the super-majority Democrats who control the house and senate weaseled out. Reforming the tax system could be controversial, sure, but if the biggest thing that Olympia deals with is the state budget, and they have the recommendations for solutions, and those recommendations make sense, and they are widely supported—then just do it already. It's irresponsible to make the public run an initiative, spend a bunch of money campaigning, make voters put up with annoying campaigns and counter-campaigns, and add costs to the state to run the elections, all to make up for the legislature's failure to do its job.