About That Heroic Drug Bust in Pioneer Square

The Seattle Times described the bust on Tuesday as a major operation that would sweep drug dealers off the streets of Pioneer Square, saying that undercover narcotics detectives rounded up the 15 “most prolific sellers of crack cocaine.” The Seattle Times only spoke to cops and prosecutors, who hailed the months-long investigation as a great help to the neighborhood and portrayed the defendants as big-time dealers. But the Seattle Times's Sara Jean Green didn’t talk to anyone else, such as experts on the impact of buy busts downtown, or examine police records to see just what sort of people were arrested.

Records obtained from the King County Prosecutor’s office show that the 11 people who went to hearings yesterday (whose records could be released publicly) were selling minute amounts of crack, had little or no money, and were overwhelmingly non white (reflecting a racial disparity chronic to police buy busts in Seattle). These were small-time dealers, and sentencing them to prison won’t solve the problems of drug dealing or drug use in Pioneer Square.

Of all the drugs purchased, the total weight was only two grams total (from 11 people)—with a street value of only $200. That averages less than 0.2 grams per person.

The sweep was conducted, the Seattle Times reports, "in hopes that prosecutors can successfully argue for stiffer prison sentences, taking the repeat dealers off the streets for up to five years," according to the prosecutor's office.

Of the 11 individuals, only four had any cash on them whatsoever, other than the money that the undercover officers gave them. The cash amounts on the defendants were $6.48, $2.62, $2.49, and $392.00. Literally, the other seven had $0 on their person, records from the prosecutor’s office show.

“If they sold drugs, it seems highly likely it was to make a few dollars so they could immediately buy more drugs for their own use,” says Lisa Daugaard, director of the Defender Association’s Racial Disparity Project, which has followed the city's buy-bust operations closely for the last decade. “We should be able to address that problem humanely through a public health strategy.”

Most of the suspects are people of color. Based on officers' description of race, four of the suspects were Hispanic, two were white (although one of those may actually have been Hispanic based on name), four were black, and one was Native American. 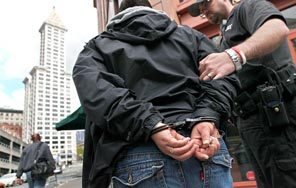 This racial disparity in buy busts are typical to Seattle. While drug sellers are usually white, even in open-air markets, the folks busted are non-white because police focus on crack markets. Katherine Beckett, a researcher at the University of Washington, concluded in a 2005 study on drug arrests in Seattle: “In particular, our findings indicate that blacks and Latinos are overrepresented among those arrested for drug possession compared with a variety of measures of drug use. This overrepresentation primarily results from law enforcement’s focus on crack users, and especially on black and Latino crack users.” She added that "we find that law enforcement’s focus on crack users does not appear to be a function of the frequency with which crack is exchanged, the concentration of crack transactions exchanges outdoors, or other race-neutral factors."

In addition, Becket wrote in another report called Race and Drug Law Enforcement in Seattle in 2003, which found, "[T]he Seattle Police department concentrates its narcotics enforcement activities overwhelmingly on areas that include racially diverse drug markets in which crack is more likely to be sold. By contrast, the SPD conducts very few operations in open-air drug markets where whites, and heroin, predominate.”

Nor is there any evidence this will reduce drug dealing or use. We’ve been through this before to little effect, making drug sweeps in Belltown and in Pioneer Square. It’s whack-a-mole with drug dealers. But the problem doesn’t go away. We did a huge bust in Belltown last year, and three weeks later they were back.

For this sweep, SPD captain Steve Brown said it was a way "to consider how best to disrupt the mechanism of the market."

But the mechanism is unlikely to be broken.

“Scooping up street-level dealers simply creates job opportunities for younger recruits,” says ACLU of Washington drug policy director Alison Holcomb. “If we're serious about having an impact on the drug market, we need to shift our focus to evidence-based demand reduction strategies like education and wraparound services for hardcore addicts.”

The SPD agrees, at least they did. Police spokeswoman Sgt. Deanna Nollette told the Seattle PI in 2006, "We've made hundreds, if not thousands, of arrests. But we recognize that we can't arrest our way out of this situation. It's a much bigger societal problem. We need to be looking at sentencing and the courts and social services."

None of this is to say that open-air drug markets aren’t a nuisance—they are. But praising a drug sweep that nets a handful of small time dealers—for long prison sentences—as a mechanism for change or a great help for the neighborhood rings hollow. They have never changed anything. The Seattle Times should know that. And I wrote this story to fill in the parts that Sara Jean Green omitted—helping her paint the whole picture. Because this sort of ineffective, old way of busting poor, nonwhite people for drugs and locking them up for five years—and the reporting that treats it like an accomplishment—should be recognized as a futile waste.