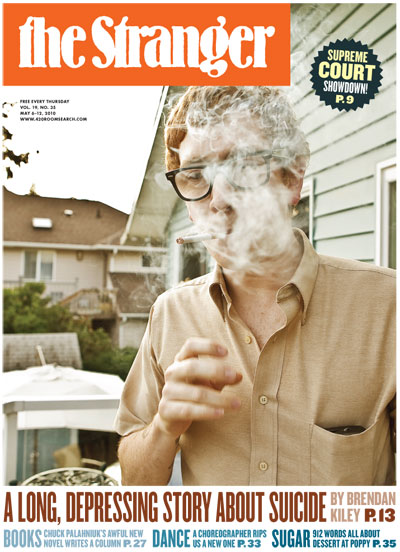 Brendan Kiley's Long, Depressing Essay on Suicide that Experts on Suicide Encouraged Him Not to Write
"In 2008 in King County, 85 people were murdered, 163 died in traffic accidents, and 210 committed suicide. Of the suicides, 93 shot themselves. In the same year, there were 45 gun-related murders: If you're going to die by gunfire in these parts, you'll most likely be pulling the trigger..."

Jake Blumgart Reports from the U.S. Supreme Court about the Ref-71 Signatures Case
"Scalia is one of the last people on the court you'd expect to see aligning himself with gay-rights advocates..."

Chuck Palahniuk's Awful New Novel Writes a Column for the Book Section
"I am a novel about a woman who takes care of an older, washed-up celebrity, and I am written in the most annoying style of any Chuck Palahniuk novel to date..."

Choreographer KT Niehoff Rips The Stranger a New One
"I have embodied that desperate artist hoping someone will care enough about the work to deem it worthy of writing about. And I have been silenced by this power. I'm done. It's time to review the reviewer."

Megan Seling Writes 912 Words All About a Single Course at Poppy
Pastry chef Dana Cree's thali "is quite possibly the best dessert experience in all of Seattle."

Eric Grandy on Seattle's World-Renowned Shoegaze Recluse
"The Sight Below was never supposed to put Rafael Anton Irisarri in the spotlight. Originally, the multifaceted Seattle musician meant for the Gas-inspired ambient project to be anonymous..."

Plus, all the columns you know and love! Public Editor by A. Birch Steen ("Real journalists—good journalists—do not write about suicide because countless studies have shown that suicide journalism begets more suicide"), Last Days, I Anonymous ("I heard you puking up your dinner last night"), In Art News (Michael Darling), Theater News (Lauren Weedman), Bar Exam, Chow Bio (interview with a cup of green tea), The Happiest Hour, Fucking in the Streets, It's a Hit, Data Breaker, My Philosophy, The Score (two brand new operas), Drunk of the Week, Poster of the Week, Underage, Party Crasher ("Children battering a facsimile of Earth with a McDonald's baseball bat—that's almost too many layers of irony to wrap your head around"), Concessions, I Love Television, Control Tower, and Savage Love. Plus all the other articles and calendars.