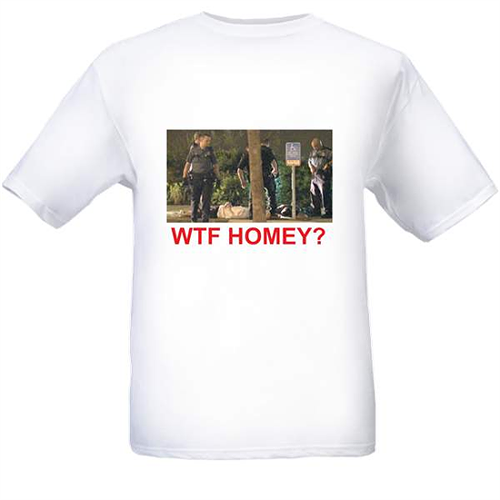 University of Washington faculty say they will refuse money from t-shirt sales that are being marketed with a promise to direct some of the proceeds to the school's communications department.

"It ain't going to happen," says Bob Roseth, director of the news office at the UW. The decision "had to do with the content of several of the shirts." He says, for instance, "There is the 'WTF Homey' shirt. That one has raised some questions. It’s profane and in questionable taste."

The shirts are apparently being marketed by Jud Morris, who filmed a racially charged police encounter that has triggered criticism of the police and Fox affiliate Q13 for failing to air the footage; Morris has been promoting the shirts on his Twitter feed.

Beyond Belief Shirts claims on its website that some of the proceeds from sales "will be used to establish a scholarship fund on behalf of the University of Washington Department of Communication, to benefit the underprivileged pursuing a career in journalism."

"We have never talked to Jud Morris and have no agreement with him," David Domke, chair of the UW's Department of Communications, said in a statement this morning. "While we commend the desire to support students, we don’t want support to come from such a vehicle."

A call and email to Morris were not immediately returned.

UPDATE: Morris has replied via email. "That is very disappointing," he says. "I was really hoping to do some good there. Looks like I will have to find another school that wants the money."