Boulder, Colorado has been trying to crack down on bars and drinking college students for over a decade. “It has been a long struggle,” says Boulder council member Ken Wilson. The problems arise from students at the University of Colorado who go out to bars in the Hill neighborhood, have parties in rental houses, and get rowdy.

So Boulder has found, its city council hopes, a solution: On Monday they appointed former Seattle city attorney Tom Carr, who lost a bid for reelection last fall amid a hurricane of controversy, largely related to his zealous crackdown on bars, as Boulder's city attorney.

“We asked each of the candidates about the problems and I felt that Tom Carr had a good progressive attitude about holding the bars accountable for being good establishments, not over serving, and holding them to the law,” says Wilson. As we have reported, Carr has aggressively pursued restrictions for bars in Seattle, conducted crackdowns on night clubs, sought to deny liquor licenses, and pushed so-called good neighbor agreements—often creating the perception that he was fueled by political motivations and a vendetta against alcohol rather than genuinely trying to improve public safety. Carr is also noted for getting mad, subpoenaing reporters, fighting against free speech rights in parks, and pursuing seemingly frivolous litigation.

Wilson continues, “He did talk about good neighbor agreements, and we have tried to use those also, so I think he can help us with that.” 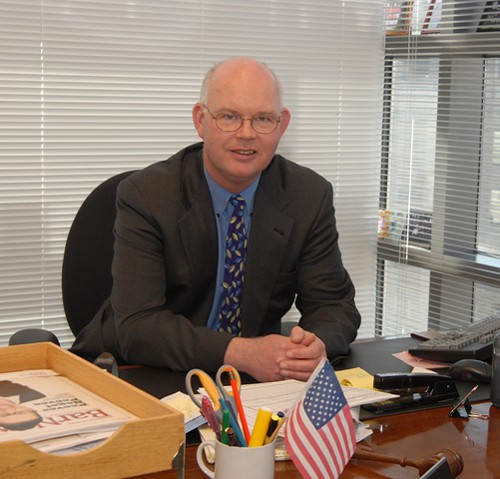 Carr told the Daily Camera that things were "blown out of proportion" during the election and that "there was a lot of rhetoric that went around." The Daily Camera also reported that Wilson like Carr because, “It sounded like he had some real creative solutions to some common problems we have."

But in Seattle, when Carr’s office had a “creative solution” to dealing with bars—working with police to stop people on the street and ask where they’d been drinking—it caused a backlash. An attorney for local bars, David Osgood, said at the time, “‘Creative solution’ is another code word for harassment.”

Another “creative solution” that Wilson likes, he told me on the phone, is Carr’s approach to cracking down on homeless camps. “Some of the homeless people are saying it is against the Constitution to prevent people from sleeping, and there have been threats of lawsuits from the ACLU,” Wilson says. “Tom gave a good presentation on why the city can have anti-camping law.”

Starting July 1, Carr will receive $170,000 a year to manage an office of 17 people (less than a fifth of the staff he had in Seattle). He’ll oversee litigation for the city and prosecution of low-level assaults, alcohol consumption, underage booze possession, and other petty offenses. Fortunately, he won’t be handling marijuana cases—which he pursued despite a Seattle law making them his lowest priority—because Boulder County’s district attorney handles those, says Sherry Peng in the city attorney’s office.

"We don't want Tom Carr to import his backward thinking on marijuana," says Mason Tvert, the director of a marijuana-legalization group called SAFER. "We hope Tom Carr will respect the fact that majority of citizens of Boulder think marijuana should be legal."