Another Way to Criticize the Critic 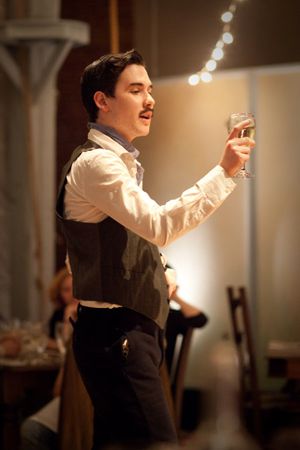 One method, which we've already discussed, is to send a bristling letter of the "you are snarky/sarcastic/unappreciative of our hard work/dead of soul/incapable of appreciating our wonderful wonder" variety—a method used by aggrieved choreographer KT Niehoff which we examined a few weeks ago.

Another way is to organize your friends into a comment campaign that contradicts the review and questions the critic's grasp of reality—a method currently being deployed against my review of the latest show by experimental dinner-theater company Cafe Nordo.

A few excerpts from the pile:

Seriously? When was the last time you had a 5 course meal and wine flight for under $150?! The food and wine is fantastic, fresh, sustainable, and local! On top of all that you get a wonderful theatrical performance and great service! I have to say, I left thrilled and felt like I had gotten a steal of a deal. Perhaps you are a little out of touch.

For example, you mention some details of the show and script, but almost nothing about the food itself, flavors, pairings of wine with each course . . . you have nothing at all to say? It is so anomalous that you do not comment on such an important detail that it seems that you have ascended the Ivory Tower of Critics: you must be taking your position for granted.

If my friends and I are looking for thematically germane entertainment, we'd just meet up for some Amy's Organic microwaveable meals (don't knock 'em until you try them) and discuss the social and political implications of the latest episode of the Simpsons. But instead, we'd much rather build our community by sharing a fantastically fresh, local, organic and sustainably harvested meal - all while enjoying some of Seattle's finest performers dancing and singing bawdy songs. There are certainly elements of the show that are still maturing, but it is early in the run.

The argument seems to be that the idea is good, the motivation is good, the food is good, the presentation is good, the characters are good, and the script is overdone (or at least, it was on opening night, when most brand new shows haven't yet been trimmed into fighting shape). But you seem to conclude that for that one reason, it's not worth the ticket price, which is about the same as a prix fixe dinner with wine at most local restaurants that have no entertainment at all? I don't quite understand the logic.

I'll agree with Mr. Kiley that the script is a little soft, but to try to couch this as a value proposition is to miss the point entirely. The fantastic (and rare) local wines paired with imaginative dishes (the shellfish presentation simultaneously delighted me and blew me away) provide more than sufficient value.

This doesn't seem like a series of spontaneous and unsolicited comments. The dead giveaway: nine Stranger comments in 24 hours that all agree with each other—how often does that happen?

The second giveaway: they sound like they were written (or prompted) by the same person. Lots of "fantastic" and "sustainable" and "fresh" (the meal was all about fish, people—fresh is the least we can hope for), and excuses about why it's okay for some performers to not have their shit together (excuse me, to still be "maturing") on opening night.

The third giveaway: several of the commenters registered for the first time yesterday, as soon as the review came out, so they could complain about it. Which is great—we love complainers, we are complainers—but it's also suspicious.

Read some more of our ig'nant, wrongheaded theater reviews in this week's theater section: reviews of a smart and fun—if sometimes sloppy—musical about Nietzsche (no comments on that one—people remember and react to the bad reviews and ignore the good ones), a sci-fi play at Annex, an oldie by Horton Foote, and a mediocre new play by the beloved locals at New Century Theater Company (which also has some querulous comments by people who registered just to disagree).