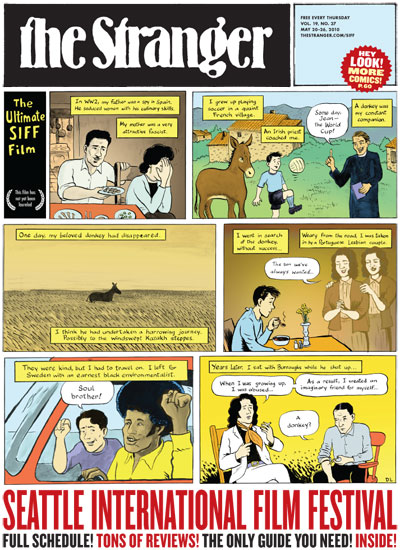 The World's Most Comprehensive Guide to the Seattle International Film Festival
"In this year's festival, you'll find all the usual suspects: Estonian women ironing, Vietnamese women dying, Korean women bickering, Russians who are bummed out, Spanish people who are caliente, Hugh Hefner, Joan Rivers, a donkey, and an inordinate amount of three-way sex." For a better version of David Lasky's cover comic, click here.

Dominic Holden Reports on More Allegations from Within the Q13 Newsroom about the Station's Relationship with Seattle Police Department
"A current Q13 employee says that Q13 routinely buries coverage that would cast law enforcement in a poor light..."

The Three Candidates for Police Chief Mayor McGinn Has to Choose From
The best candidate for Seattle's next police chief isn't from Seattle.

Jen Graves on SAM's Kurt Cobain Show
"She filmed herself and her son jumping on a trampoline to 'Smells Like Teen Spirit,' then doused the film in materials from Nirvana lyrics: pennyroyal tea, bleach, lithium, cherry antacid, laxatives..."

Plus! Public Editor by A. Birch Steen ("Gird your eyeballs, don your rubber gloves, or, better yet, run to your nearest incinerator and throw this wad of trash directly inside"), Last Days, I Anonymous, Police Beat ("Good writing goes hand in hand with good police work"), Bar Exam (Fonté, next door to the Lusty Lady), Fucking in the Streets, It's a Hit, Data Breaker, My Philosophy, The Score , Drunk of the Week ("Which Stranger staffer got so darn drunk they done peed their bed?!"), Poster of the Week, Underage, Party Crasher ("One partyer, whom I assumed was only in street clothes, brought a towel to assist with the vomit-inducing pressures of space travel"), I Love Television ("... SIX freaking hours of Lost... "), Control Tower, Savage Love, and much, much, MORE!