Who Should Win the First Annual Stranger Genius Award For Music? 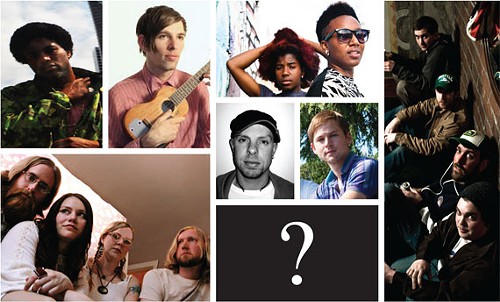 This year, we're thrilled to announce the first annual Stranger Genius Award for Music—we'll be giving one local musical artist/act/or organization $5,000, no strings attached. And Seattle is overflowing with geniuses to choose from:

What's most promising for the new category is just how much ground it could potentially cover. It could go to outré hiphop act Shabazz Palaces, for his expert and adventurous destabilizations of that genre's forms and norms. It could go to Throw Me the Statue songwriter Scott Reitherman, for his uncanny way around a wordy, brainy but utterly catchy pop tune. It could go to Decibel Festival founder Sean Horton, for his massively successful efforts to put Seattle on the international map not just as a rock town but as a hotbed of world-class electronic music. It could go to Jherek Bischoff, for his work with the Dead Science and other bands and for his more avant-garde compositional work. It could go to the Portable Shrines collective, for its work in facilitating an underground of new psychedelic happenings in Seattle's music scene. It could go to THEESatisfaction, for their Star Wars rebel (without a "pause") rap and R&B. It could go to Foscil and Truckasauras, for the linked crews' serious electro-acoustic jazz improvisations and their more popular and impish electronic party music. Or to countless others.

And, we're open to suggestsions. So, who do you think should win and why? Readers are already making some fine arguments for the artists they'd like to see honored:

Karl Blau. 15 years of being the NW's prime architect of lo-fi dub-folk-electro-jazz-grunge, and still innovating. Post-genre before post-genre was cool. His adventurous influence is felt widely, yet he's doing his best work RIGHT NOW.

The Sublime Frequencies label is indeed an invaluable local treasure and should be on the list for sure.

I'm so glad there's finally going to be a Genius award for music! There are so many worthy contenders...

Pearl Jam, just for the lyric, "when sumthin's cooold, I'm gonna put a little blanket on it". That's like the E=MC2 of music, and I bet Stone good get a pretty decent hair cut, or a new pair of shoes with $5k.

Lars Finberg should absolutely be represented in this. As one of the original members of the A-Frames, he then went on to create and front The Intelligence, but as the sole songwriter who also plays ALL of the instruments on the albums himself, he's recorded some of the most brilliant, infectious, catchy, weird and memorable punk/pop in this city over the course of the last 10 years. Also fronts best new band in Seattle, PUBERTY.

You can make your voice on the matter heard HERE.