Apple revealed the we-already-knew-about-it iPhone4 at their annual developer conference in California this morning. 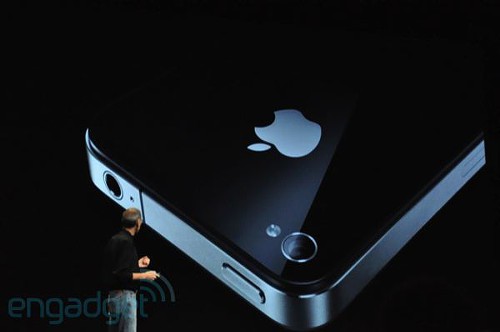 It has basically everything we had already heard about the phone that Gizmodo famously (and allegedly feloniously) revealed:

• A4 chip (that means it fast as balls)
• Front-facing camera
• Flash (no, not that one, the kind for lighting up photos.)
• 5 megapixel camera, backside illuminated sensor, etc.
• HD video recording (720p at 30fps), with tap-to-focus in video
• iMovie for iPhone, a mini editing studio app, for $4.99
• Super high-resolution display (326 pixels per inch). They're calling this the "Retina Display" which is disappointing. What are they going to call their actual retina display when that comes out?
• Beefier battery - up to 7 hours of 3G talk time.
• Gyroscope added to the array of motion sensors. This will be good for games. Or spinning around. Or something.
• "Face Time" which is their two-way video chatting thing. It'll work from iPhone 4 to other iPhone 4s, and on WiFi only, at least for the rest of 2010.

When? June 24. Someone will probably want to get me one of these to celebrate the birth of my child, which is projected to be that same week. Right? Right? Mom?

UPDATE: My take? These are going to sell ridiculously well. The prices are extremely aggressive, the speed and display resolution will impress people instantly, and the video chatting is one of those "wow" features that few people will use much but will be great for marketing. There are a lot of impressive phones on the market these days, some with many of the same features (or more), but that won't matter. If Apple keeps upping their technology at this rate, it's going to be hard for anyone to catch up. Android is gaining ground, and will be a solid competitor for a long time, but this phone will be another boost for Apple for the near future anyway.