On Abortion, Many Questions That Dino Rossi Still Won't Answer 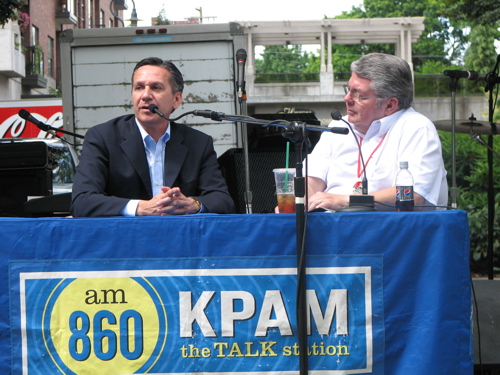 Yesterday, after being presented with a list of past Patty Murray votes on abortion-related measures, Republican Senate candidate Dino Rossi began to shed some light on his thinking about reproductive rights.

It's very helpful to know that Rossi apparently wants to 1) ban abortions on military bases 2) prevent U.S. donations to the United Nations from being used for abortions overseas 3) forbid the federal government from covering abortions in any government-backed health care plan 4) torpedo money for education intended to reduce teen pregnancy 5) criminalize taking a minor across state lines for an abortion, and 6) roll back the over-the-counter availability of Plan B.

And remember: For all of those newly-illuminated Rossi positions, there's a Murray vote on record in the opposite direction. Says Democratic spokesperson Anne Martens:

Patty Murray understands that personal health care decisions are best left up to the woman, her family and her doctor. Dino Rossi thinks that the government should make those decisions for you.

But there are still some basic questions about abortion that Rossi won't answer. Yesterday I asked his campaign whether Rossi supports an abortion "litmus test" for Supreme Court nominees—like, oh, say, Elena Kagan.

His only litmus test is that they interpret the law, not make it up.

Ok. I then asked Morris whether he believes the court's ruling in Roe v. Wade, which identified a Constitutional right to an abortion, was an example of the court making things up.

I also sent her an updated version of this old, still unanswered question about Rossi's vague "every soul has a value" talking point:

You say that every soul has a value, but when we're speaking about a pregnant woman many people would argue that we're really talking about two souls.

So what's your position when those two "souls" come into conflict—cases of rape, incest, and danger to the life of the mother?

This morning, Murray announced that she's introducing new Senate legislation to "raise awareness about the availability of emergency contraception." In line with Murray's politics, no doubt, and also no-doubt timed to further highlight her contrast with Rossi on this issue.

This bill directs the Secretary of the Department of Health and Human Services to establish an Emergency Contraception Public Education Program through the Centers for Disease Control and Prevention.

The program would provide a description of emergency contraception and an explanation of its use, safety, efficacy and availability to nonprofit organizations, consumer groups, institutions of higher education, Federal, State, or local agencies, clinics and the media.

I forwarded all of the available bill details to Morris and asked whether Rossi, as a U.S. Senator, would support or oppose this proposed legislation.