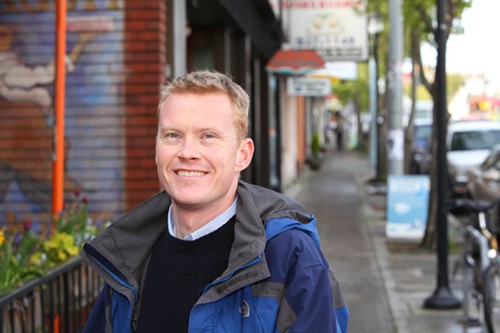 Last week, I posted about the race for state legislature in West Seattle's 34th District, and in that post noted that one of the major candidates, Mike Heavey, hadn't responded to our interview request. (The request was made through his web site, which lacks both a phone number for people to call for more information and any details on where he stands on major issues.)
Last night, I was able to connect with Heavey, 30, who told me his web site is currently taking a back seat to his doorbelling efforts at the instruction of his consultants, but that he's told them it needs to be improved. “We’re working on it," he said. "It should have been done yesterday, honestly.”
Web troubles aside, Heavey leads the pack in the 34th when it comes to fund raising. He's brought in about $25,000 in donations (vs. just over $19,000 for opponent Marcee Stone, a downtown legal secretary and campaign finance reform activist, and about $18,500 for opponent Joe Fitzgibbon, a 23-year-old former legislative aide to state representative Sharon Nelson and veteran of the Burien Planning Commission.) Heavey also has the most cash on hand, about $20,500.
"I really think it is because I have the broadest support," Heavey told me. "Joe and Marcee, as we say with the 34th District, most of their friends are in politics. And most of their friends don’t really want to weigh in on this race one way or another.”
Heavey, trying to cast himself as a "third way" in a race where Fitzgibbon and Stone have sewn up far more establishment endorsements, emphasizes his time both in and out of government. (Though, having grown up with a father who represented the 34th District in the state senate, you could argue that he's actually spent more time close to government than anyone else.)
“I’ve worked in both sectors of the economy. I’ve worked for fortune 500 companies. I’ve worked for King County. Throughout college I bar tended and waited tables, so I’ve worked for small businesses… I just think that combined experience is important, versus Marcee, who’s been a legal secretary her whole life, and Joe, who’s very smart and very sharp, but—he’s only been in the workforce a few years.”
Heavey got his degree in political science and criminal justice from the University of South Alabama, where he'd gone to play soccer (his position: forward).
Studying criminal justice is often a precursor to a career in law enforcement, but Heavey didn't really want that; he found the policy more interesting. So he went to work for Expedia.com, using his degree to help them fight online fraud before, eventually, growing tired of “protecting some corporation’s bottom line.” He then went to work for a security firm, helping them do crime prevention through environmental design. When Dow Constantine made his run for County Executive, Heavey, who knew Constantine through his father, volunteered full time for the campaign. Now he does constituent relations for Jan Drago, who's temporarily filling the county council seat that Constantine vacated when he moved into the exec's office.
On the issues, Heavey says his most important goal is ballot initiative reform. “Every year we see the negative side of a voter initiated law,” he said. He wants to raise the fee for filing an initiative and he wants to make it harder for paid signature gatherers to engage in “manipulations of the system" by, for starters, requiring them to be Washington State residents.
As for the initiatives being pushed this year, he's against I-1082, the workers comp privatization scheme; opposed to both liquor privatization efforts, I-1100 and I-1005, because “I think that the impact on kids and the unintended social costs of privatizing liquor haven’t been fully explored”; in favor of I-1098, Bill Gates Sr.'s income tax initiative; against all of the Eyman initiatives, which seek to repeal soda and candy taxes the state legislature instituted this year, and also seek to re-institute a 2/3 majority requirement for any tax increases; and is a signer on I-1068, the marijuana law reform initiative (“I’m definitely in favor of legalizing marijuana," he said. "Basically, I think that booze in the hands of minors is much worse than marijuana in the hands of minors”).
On the viaduct replacement mess, Heavey said he was initially for the retrofit because the viaduct provides vital access to downtown for residents of West Seattle. But now, "going forward," he's for the tunnel. However, he said: “One thing I just can’t come to terms with is saddling Seattle with the cost overruns. That would be my goal in the 2011 state legislative session—would be to make sure that this state highway system, the state pays for.”
As for staggered bar closing times, Heavey said: "I explored this as a project in college. There is proof that it helps.” Helps with policing, helps prevent drunk driving. “Anything that’s helping small business owners, and helping the law enforcement community at the same time, I’m absolutely for," he said.
On his relative lack of endorsements, Heavey points out that while opponent Fitzgibbon may have more total legislator endorsements than him, "Joe hasn’t had one single Seattle legislator support him.” (Heavey has Seattle senators Ed Murray, Adam Kline, and Ken Jacobsen behind him. He later clarified that Fitzgibbon did recently pick up one Seattle legislator endorsement.) And, Heavey followed up by sending over some research indicating that seven out of ten of Fitzgibbon's legislator endorsements come from people who voted to saddle Seattle with cost overruns for the viaduct replacement project. (Fitzgibbon has said he is opposed to Seattle being on the hook for cost overruns.)
The Stranger depends on your continuing support to provide articles like this one. In return, we pledge our ongoing commitment to truthful, progressive journalism and serving our community. So if you’re able, please consider a small recurring contribution. Thank you—you are appreciated!
CONTRIBUTE NOW