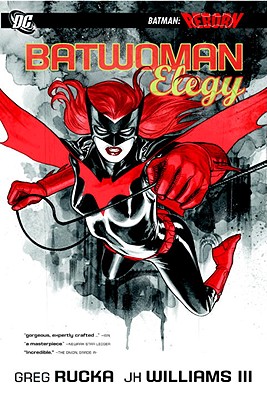 Last week, we got a copy of Batwoman: Elegy Deluxe Edition in the mail from DC Comics. The most surprising thing about the book was the introduction by Rachel Maddow. I didn't realize that Maddow was a big fan of Greg Rucka's thrillers, and, in fact, her introduction is much less about the comics and more about Rucka's writing in general. I'm sure DC Comics is grateful for the synergy, though: Batwoman is famous in the mainstream media primarily because she's a lesbian.

Elegy isn't Batwoman's first appearance in the comics, but it serves as a good introduction for new readers. Maddow's intro proves strangely out-of-place, because Rucka's writing isn't center-stage here: J.H. Williams III's art is what makes the book zip along. Each page is beautifully designed, and there's enough variety to keep things interesting. The pages where Batwoman is in her secret identity are more traditional comics pages—square panels in a grid—and when she puts on her costume, things get much more asymmetrical.

Unfortunately, as a book, Elegy doesn't feel as satisfying as it should. It begins with an adventure but then, in the second half, the gears shift to a slower, more traditional superhero origin tale. There are some nice touches—Batwoman wanted to be a soldier, but she fell prey to don't ask/don't tell and, like so many other gay soldiers, decided to dress up like a bat and fight crime instead—but when you repackage your comics into $25 hardcovers, the reader expects a bit more out of the narrative. I'd wait for the eventual paperback release of this one: There's some good superhero action, but not enough thrills to warrant the exorbitant price and "deluxe" format.