Seattle Cops Could Wear Cameras By Next Year 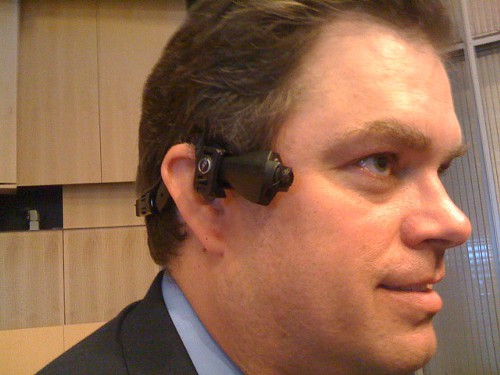 Although the Seattle Police Department experimented with body cameras on a very small scale in 2008, it was called off because the Seattle police union complained. The guild asked that cameras not be placed on officers until it negotiated with the Seattle City Council on work conditions. But Harrell said the discussion was timely. "There is technology out there, we should use it," he said.

However, Harrell agreed that body cameras raised a number of policy issues. "I am very concerned about whether the officers are receptive to this and whether there are privacy and labor issues involved," he said. Harrell said that representatives from the police union had not been able to attend the discussion because of a time conflict.

Representatives from two video camera companies made their pitch to the committee. While either body or head video cameras might result in similar savings for the city, Tom Smith, chairman of Taser International, stressed that head cameras provided "a better perspective of what’s going on."

"It's going to be focused more on what the officer is looking at," Smith said. But Steve Ward, a former Seattle police officer who started VIEVU, which specializes in small body cameras, said that head cameras were dangerous for the officer and its cords could result in strangulation. "It also makes the officer more aggressive, more robocopish," Ward said. VIEVU's biggest international client is the United Kingdom police.

Ward said he had thought of the body camera technology when he was a police officer with the SPD in the 90s. "Our cameras are easy to use," he said. "We have one switch for on and off."

More after the jump

Ward said that the SPD's Office of Professional Accountability had recorded 1442 complaints in 2009 at a cost of $7.5 million. According to him, a study by the International Association of Chiefs of Police (IACP) shows that video documentation reduced complaints by 50 percent." "People behave differently when they are on camera," Ward said. "Both officers and citizens are more professional. People who would have complaints would withdraw them after they were told that video evidence exists."

If every police officer in Seattle wears a camera it could potentially reduce costs by $3.5 million annually, Ward said.

According to IACP, 96 percent of prosecutors reported that defendants were more likely to plea when video evidence was present. When Harrell asked who controlled the cameras, Ward said it was typically dictated by departmental policy. "Usually officers will turn it on when practical," he said. VEIVU's cameras have four hours of battery life and 4 hours memory. Officers cannot alter or delete any video files. "We wanted our software to be just as easy as the camera," said Ward. "So think iTunes, but for a camera." The price tag for putting these cameras on 65 officers in the SPD? $616,465.

Taser International's AXON head cameras—which are designed in conjunction with CISCO and IBM—have a 10-hour battery life and 8 hours of recording time. Officers have to double tap to start recording. Smith said that a six-month pilot project in UK with a head camera set-up received a 90 percent public approval rate. "There were no complaints against officers with head cams," he said. Smith added that AXON's automatic data retrieval system eliminates the need of a person to download it.

Harrell said he had not yet decided whether head or body cameras would be the right fit for Seattle. "I don't want to get into a PC vs Mac debate here, there's no right or wrong," he said. "Both have their pros and cons."

The SPD already has video cameras in 275 police vehicles. SPD Assistant Chief Dick Reed said that those cameras were coming to the end of their life span. SPD is currently investigating replacement options. Harrell said he was interested in exploring whether it was feasible to replace the car cameras with head or body cameras.

It's a new queer sports bar. Or is it a sporty new queer bar?