William Powhida, Regina Hackett, and Mira Schor: There's Only You and Me and We Just Disagree, Part 7,000* 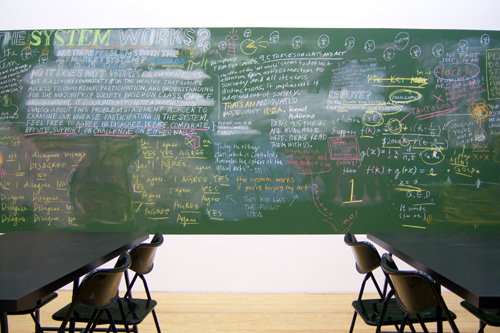 When artists Jen Dalton and William Powhida, like many artists, felt "queasy" about the art market, they made a show about it that was divided into three sections: Think Space (for talking, events, hanging out), Work Space (for making art that reflected the information coming out of the Think Space), and Market Space (where that resulting art was shown, marketed, and sold).

The discussion-generating exhibition was called #class, and it happened at Winkleman Gallery in New York. (Since then, Powhida has co-curated Magicality, the current show at Platform Gallery; my review, "Magical Thinking," is here.)

Today on IDIOM there's a very good interview with Dalton and Powhida about the origins and the effects of #class. Dalton says:

#Class helped me see that, at least for myself, the queasiness [about the market] seems to be caused by some unresolvable contradictions: We feel that art should be a gift, but we don’t want to work for free. We want recognition for our work, but we may be uncomfortable with personal attention. We want to sell work for a price that many can afford, but we can’t afford to sell it for less than it costs us to make, so we therefore can’t sell art to people like ourselves. We want more types of people to participate in art, but we might not appreciate their taste.

Over on her blog Another Bouncing Ball, meanwhile, Regina Hackett calls Powhida's work "a corrupt carnival show". She says his modicum of success has made him nothing more than a suckup to the regime he rode his way up critiquing. She also refers to Powhida's insistence on the alter-ego who makes his drawings. But actually, I haven't heard Powhida himself refer to that alter-ego in a while—his visibility has come with more accountability. And just because Powhida's been written about in the NYT, he's Jeff Koons now? Is there really no room for critique inside the art world outside the written word of the critic?

Hackett uses her post, oddly, to praise Seattle critic Matthew Kangas's dumb swipes at a couple of abstractions in the back room at Platform (his personality is fascinating, but his pronouncements about art have never been particularly relevant), which makes her seem a little cuckoo. But when she closes by saying "The rest of us are just too fucking nice," I'm with her—and so would Powhida be, I'm sure. The culture of niceness in the art world, both at large and in Seattle, means that nobody gets much real practice at criticism. 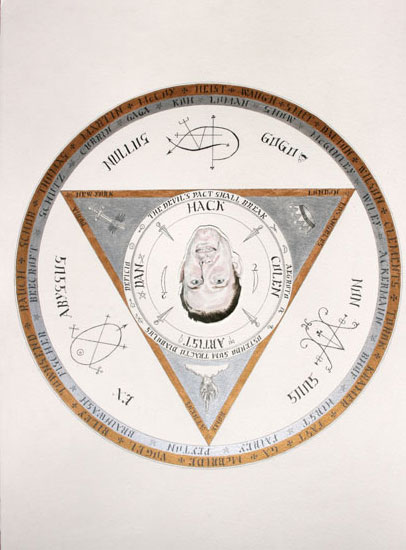 But Powhida's work does create opportunities to talk about what's good in art, and what's not—and beyond formalism. For instance, I keep thinking about his piece Talisman (Dan Golen), a 22-by-30-inch drawing in graphite and gold ink on paper, in which he sets up a tongue-in-cheek spell designed to break the contract between an artist Powhida thinks is a crank (Dan Colen) and the most powerful dealer in art (Larry Gagosian).

Executing the spell means invoking the names of "evil" artists and "good" artists, represented in rings around the outside. Vanessa Beecroft, Terence Koh, Dash Snow, Mr Brainwash, and Lady Gaga are all on the evil list, and considered together they represent, basically, lazy ethics and a general dimness/flatness. On the other side are more artists whose work engages with the world beyond art (you might call this engagement political by nature), including Omer Fast, Dalton, and Mira Schor. Who would you put on these lists?

Schor is both an artist and a writer, maybe the perfect person to consider in this search for uncorrupt, valuable criticism. In her excellent book A Decade of Negative Thinking, she describes anonymous online commenting as the worst possible type of criticism, because it almost always falls into what she calls the "sucks/bullshit" mode. (Ah, yup.)

If you're looking for the opposite of that, pick up the book.

*For those not following our every move, Hackett and I never seem to agree. The post's title is a reference to that, and a handy way to get that old song in your head for the rest of the day. Enjoy!