Posted earlier and updated with pie!

SurveyUSA has released a poll of 500 Seattle residents that shows most people agree with Mayor Mike McGinn's position on dealing with cost overruns for the deep-bore tunnel and they think the measure should go to a vote. Respondents were asked this question: "Seattle Mayor Mike McGinn wants construction of the tunnel to wait until the state promises to pay for any cost over-runs. Do you agree with the Mayor? Or disagree?"

And here's how they replied:

The pollsters also asked, "Should Seattle hold a public referendum on the deep bore tunnel before agreeing to construction? Or not?" 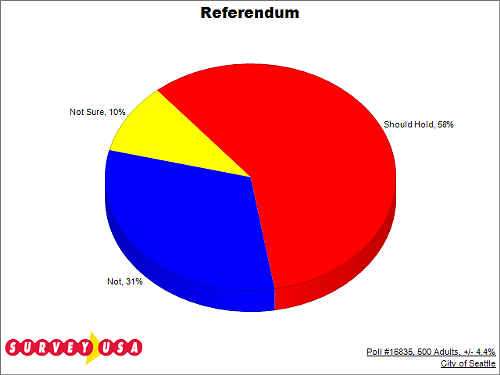 There's more over at KING 5, which commissioned the poll. Overall, people are concerned about the tunnel's costs (77 percent). But people are split down the middle over whether we should build a tunnel at all.

Cross tabs on the all the questions and responses over here.